What impact does Pillar Two in Switzerland have on your company? We support you in implementing the requirements.

What impact does Pillar Two in Switzerland have on your company?

The Base Erosion and Profit Shifting (BEPS) Project addressing the Tax Challenges arising from the Digitalisation of the Economy – resulted in a two-pillar approach:

Pillar Two is relevant for groups that have reported annual revenues of EUR 750 million or more in their consolidated financial statements in at least two of the four preceding fiscal years. If your group does not meet the threshold, you should still check – based on the ownership structure – that the group does not belong to a larger group with an obligation to consolidate (e.g. a family office, foundation, etc.).

Work on both Pillar One and Pillar Two is under way, but Pillar Two is more advanced. Originally expected for 2023, the global minimum tax of Pillar Two is unlikely to be in place that early. Although some questions remain open, international developments indicate that Pillar Two is on track for implementation at the start of 2024 in many countries – including Switzerland. 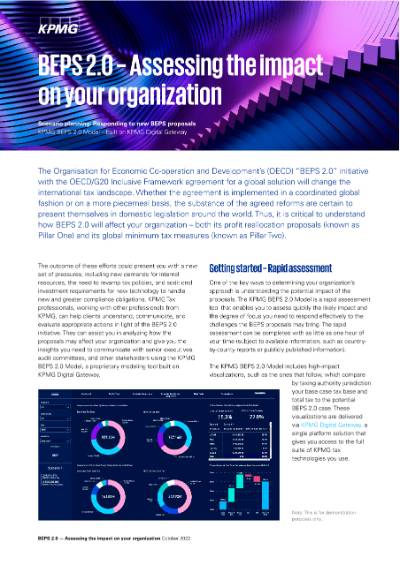 BEPS 2.0 - The impact on your organization

BEPS 2.0 - The impact on your organization

Switzerland is on track to meet the OECD’s timeline for the introduction of global minimum tax.

The Pillar Two concept will be implemented by more than 100 countries worldwide. Your specific reporting and compliance obligations will be driven by the implementation timeline.

While there is still some uncertainty for a small number of countries, it seems likely that most countries – including Switzerland – will implement Pillar Two for financial years starting on or after 31 December 2023. This means you’ll need to be able to quantify and report the possible additional tax burden in 2024. By then you’ll need to have implemented the relevant governance, processes and systems.

For most MNE groups, the first Pillar Two tax return will likely have to be filed in June 2025 or later. However, companies should be aware that investors may expect disclosures about the potential impacts before changes to local tax laws are finalized. If you expect the global minimum taxation to significantly affect you, and this information is relevant to the users of your financial statements, you should consider providing disclosures in your 2022 annual report.

Further information in this regard can be found here: Global minimum top-up tax under BEPS 2.0.

What information will you need to collect?

The GloBE model rules published by the OECD for Pillar Two address about 150 different data points and elections that need to be managed. We have a proven data mapping approach to align the GloBE rules with the data available in your organization. We offer a full-day Discovery Workshop to help you identify the relevant data in your systems and data landscape.

Your group will have to decide between designing your own Pillar Two computation engine, licensing a product from the market or outsourcing the computation to an external provider.

The KPMG BEPS 2.0 Model has been designed to model the Pillar Two impact on your group based on your specific circumstances (see also below).

Our phased approach helps you prepare for Pillar Two – wherever you currently stand on your implementation journey.

First of all, we align on status and timeline and then define relevant stakeholders and team members.

We help you determine pilot countries/entities for data mapping and perform an initial high-level impact calculation using the KPMG BEPS 2.0 Model if appropriate.

This is about process definition and structuring, including definition of end-to-end data management and choosing appropriate technology.

In this phase, we focus on compliance requirements and technology implementation.

Our team of experts is experienced in guiding groups through the implementation process. We’re ready to support your Pillar Two project through an approach that:

Partner, Head of Tax & Legal, Member of the Executive Committee

As Pillar 2 takes shape in Switzerland, we look at the current implementation status.

The Federal Council has decided on the implementation of Pillar Two in Switzerland.

On 20 December 2021 the model rules for minimum taxation were released by the OECD.

Stefan Kuhn talks in an interview about the global minimum tax (PDF, in French).