Yet women continue to face a gender pay, income and superannuation gap. In effect, women are penalised for taking on the bulk of the unpaid caring work in Australian households.

It need not be this way. In northern European countries, men do around three-quarters as much unpaid work as women, whereas Australian men do only a little over half that of women – ranking Australia a lowly 15th among OECD countries in this scale. 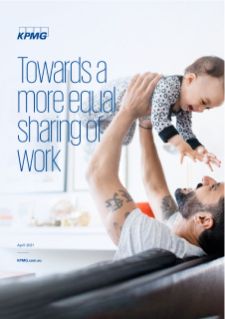 Towards a more even sharing of work

Mothers and the Australian workforce

The number of mothers in paid work in Australia is lower than many other OECD countries.

Since Australian women spend so much time out of the workforce bearing and caring for children, the gap between male and female workforce participation rates is a full 10 percentage points – the 16th largest gap in the OECD.

The labour force participation gap in northern European countries is around half that of Australia, while in Canada it is around three-quarters of Australia’s gap.

Looking specifically at mothers, the proportion of Australian mothers in paid work, at 69 percent, is lower than in 23 other OECD countries.

KPMG has developed a measure of the disincentives facing working mothers – the workforce disincentive rate (WDR).

Australia’s tax and transfer system sends contradictory signals to women: it encourages them into tertiary education but penalises them much more heavily than men for wanting to get ahead in their careers.

Around 72 percent women aged 25-29 years had attained a formal qualification of Certificate III or above in 2020, compared with 65 percent of men in the same age group. More than 58 percent of students at university are women.

But when mothers seek to increase their days of work beyond three per week, they are penalised very heavily.

The WDR is the percentage of earnings from an extra day worked that is lost from a reduction in Child Care Subsidy, a reduction in Family Tax Benefit and other government income support payments, increased personal income tax and increased out-of-pocket childcare expenses.

Pay, income and superannuation all present significant gaps in earnings.

Compare these WDRs of 75-120 percent with the top personal tax rate for men of 47 percent. Working mothers face much harsher work disincentives than men.

The gender pay gap is 20 percent. KPMG estimates that, based on the rate of reduction over the 4 years before the pandemic struck, it will take until 2046 for the gender pay gap to be eliminated.

The gender income gap at age 30 is around 28 percent and during the peak earning years of 45-49 it opens up to more than 36 percent.

In the years approaching retirement age, the gender superannuation gap can be anywhere between 22 percent and 35 percent.

Existing policy settings are based on a 1.5 earner model in which fathers do most of the paid work while mothers do part-time paid work but most of the unpaid work. In effect, paid work, dominated by men, is being valued more highly than unpaid work, which is mostly performed by women.

KPMG advocates a parent equality model involving parents sharing different burdens at different times, but with a view to caring responsibilities being fairly divided over the parents’ lifetimes.

The parent equality model entails greater acceptance of part-time work for fathers where, for example, fathers drop back from five days per week of work to four days and mothers increase their working days beyond three per week.

Policy reforms that would move couples towards a parent equality model include:

Download the full report > or get in touch below.

KPMG has an ingrained culture of inclusion and diversity, focusing on shared values, experiences and aspirations.

KPMG has an ingrained culture of inclusion and diversity, focusing on shared values, experiences and aspirations.

Other reports in the Gender Equity series