The year 2020 will be remembered for many things – deal flow in global banking, however, won’t be one of them. Though banking industry fundamentals remained sound, the operating environment – triggered by the global economic slowdown and COVID-19 – hardened. Accordingly, global deal activity declined 26 percent and 41 percent, respectively, in volume and value compared to 2019. The US, India, China, Italy and the UK remain the most active markets as domestic banking deals continue to dominate, making up nearly three-quarters of total activity.

COVID-19 accelerated talk of M&A and continues to shape much of the European banking landscape. Weak profitability remains a sector-wide concern amid the combined pressures of negative rates on net interest income, sluggish progress in fee generation and limited progress on cost measures. Additionally, a spike in loan-loss provisions following an anticipated increase in NPLs has trimmed down post-tax profits. These sector challenges and weak valuations suggest an uptick in sector M&A is forthcoming.

In 2H2020, sector consolidation had already begun somewhat with a few large deals circulating. The recognition of “badwill” by European regulators might make deals more attractive going forward, especially for high-value transactions. It may also act as a catalyst for domestic rather than cross-border transactions in the near-term. Scale alone however will not be enough to drive deal activity – other factors like margin considerations, NPLs, business model fit, scope for meaningful cost cuts and potential value creation will take priority. The drive to consolidate, from a supervisory perspective, is a logical conclusion to remedy some long-term ECB-cited challenges facing the European banking sector.

While it is still difficult to decipher how the M&A market may evolve in 2021, there are signs of life. Though a global v-shaped economic recovery appears unlikely, several major themes could ignite near-term deal activity. These include:

After the COVID-19 pandemic, the banking industry is experiencing a strong consolidation momentum, especially in Europe. M&A is a way for banks to face the persistent low profitability and to reduce costs thanks to synergies, thus enhancing competitiveness. Some of the largest banks are currently discussing about potential consolidation. Larger and more profitable banks are also asked by national governments to rescue weaker banks with banking regulators currently encouraging banks to merge.

Global banking M&A market slumped in 2020, both in volume and their reported size. Deals that were close to signing or execution were moved forward and completed while those in initial phase or near were delayed. During the period, an uptick in non-domestic transactions was seen while at regional level, ASPAC deal activity remained relatively buoyant.

In 2020, there were a total of 1,391 deals. Among the top 10 transactions basis deal value, domestic deals remained prevalent while only one cross-border  transaction was announced.5,6 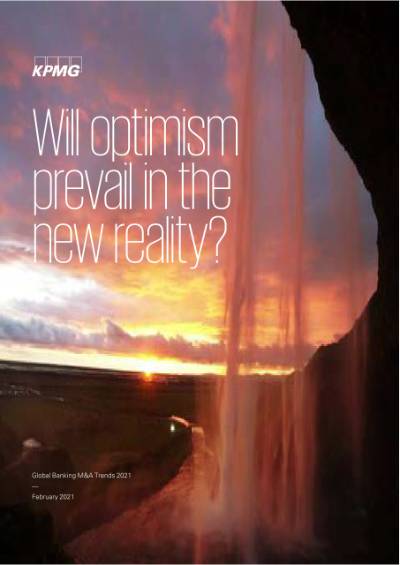 Will optimism prevail in the new reality?

Will optimism prevail in the new reality? Key insights and summaries for 2021

More than US$1.5 trillion in dry powder remains and surplus cash may lead to higher valuations in 2021 Though all themes may not be prevalent for all geographies, six major themes are expected to govern banking M&A in 2021