The optimism that permeated the fintech market at the end of 2021 quickly transformed into concerns about a potential recession in H1’22.  Geopolitical uncertainty, turbulent public markets, ongoing supply chain disruption, high levels of inflation and increasing interest rates have all contributed to more subdued levels of UK fintech investment compared to the record highs experienced in 2021.

However, despite a slowdown in investment compared to last year, H1 2022’s figure remains above the H1 2020 and H1 2019 figures. Last year’s investment total was strengthened significantly by the size of many of the deals, which included the £12.5 billion Refinitiv deal in January 2021. Taking out 2021’s outlier results, such as the Refinitiv deal, the drop in UK fintech investment is not nearly as significant and is well above H1 2019’s figure of £3.2 billion. Five out of the ten largest fintech deals in H1 2022 in the EMEA region were completed in the UK.

Total global fintech funding across M&A, PE and VC reached £90.8 billion across 2,980 deals in H1 2022, which fell from £93.6 billion across 3,372 deals in H2’21, mirroring the decline in investment experienced in the broader technology sector. Total fintech investment and deals volume declined in both the Americas and EMEA regions, while the Asia-Pacific region attracted a new annual high of fintech investment amidst a decline in the number of deals.

While VC investment globally declined from £56 billion in H2’21 to £44.3 billion in H1’22, compared to all periods outside of 2021, the amount was incredibly robust. The Americas attracted the largest amount of VC funding (£22.9 billion) and EMEA saw a new record high level of funding for a 6-month period (£14 billion).

Payments continued to attract the most funding among fintech sub-sectors globally, accounting for £36.7 billion in investment compared to the £50.8 billion seen during all of 2021. The acquisition of Australia-based Afterpay by Block (formerly Square) for £23.5 billion accounted for the largest payments deal of the quarter —and the largest fintech deal globally during H1’22.

Crypto-focused companies attracted £12 billion during H1’22, including a £0.9 billion raise by Germany-based Trade Republic in June. Investment in the insurtech sector dropped considerably, with £3.2 billion of investment globally during H1’22 —well off pace to match the £12.5 billion in investment seen during 2021. Compared to a number of other areas of fintech, global investment in regtech showed strong resilience in H1’22. Globally, regtech companies attracted £4.7 billion in investment across 157 deals —following a similar trajectory to the level of investment seen in 2021. Despite a slowdown in UK fintech investment compared to last year, the UK remains at the centre of European fintech innovation with UK fintechs attracting more funding than those in France, Germany, China, Brazil and Canada combined. Similar to the UK, the EMEA fintech market also experienced a slight drop in investment in the first half of 2022 with £22.3 billion of investment across the region, down from £26.6 billion in the second half of 2021. The decline was mainly driven by a fall in M&A deal value, which sank from £13.1 billion in H2’21 to £6.1 billion in H1’22. Regtech has been a particularly hot sector in the EMEA region in the last few months. In the wake of the conflict in Ukraine, there has been strong interest in anti-money laundering applications as banks seek to comply with sanctions, embargos and other regulatory measures.

Taking out 2021’s outlier results, fintech investment in the UK remained fairly positive in H1’22. The diversity of fintech sub-sectors could help to keep investment in the space relatively robust in the near-term, despite the uncertainty permeating in the market which is expected to continue into H2’22.

All currency figures converted from US$ to UK£ using the conversion rate as of 19 August 2022.

Download the full copy of the Pulse of Fintech report below. 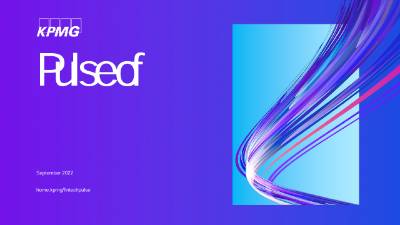 Global fintech investments in H2’21 recorded US$210 billion across 5,684 deals

Global fintech investments in H2’21 recorded US$210 billion across 5,684 deals

During H2’21, we saw interest in fintech grow to a fever pitch in most regions of the w...

A user’s guide to RegTech

A user’s guide to RegTech