We are pleased to present the annual KPMG budget report for Saudi Arabia, providing our view on the government’s announced expenditures and revenues. The presented figures are based on the Ministry of Finance’s (MoF) Budget statement for FY 2023, as approved by the government on 7 December 2022, with our views supported by internal analysis and other sources.

As per the MoF, real GDP growth is estimated to expand by a robust 8.5% in fiscal year 2022, supported largely by a sharp rise in oil production as well as a an uptick in non-oil economic activity. Most components of non-oil GDP have continued to expand amid a rebound in consumer and business confidence, supported by the aforementioned high international oil prices and oil production.

Growth in the domestic non-oil sector and still high oil income should support robust real GDP growth in 2023. A broad-based pick-up in the non-oil sector should support tax receipts, including through value added tax (VAT) as consumer spending remains healthy, and as healthy corporate profits are expected to translate into higher government revenues. These revenues, combined with fiscal prudence, are consistent with the government‘s fiscal sustainability program and will improve public finance metrics – Saudi Arabia‘s public debt stock is significantly lower than that of its advanced economy peers, for example.

A broad-based recovery in the domestic non-oil sector, alongside high international oil prices, are expected to sustain healthy real GDP growth in 2023.

Longer-term economic stability is also expected to be supported by conducive government policies, including Vision 2030 as the central agenda for economic diversification. Nevertheless, the 2023 budget indicates that the ongoing cyclical economic recovery remains a key pillar underpinning a short-term strengthening of the public balance sheet.

Planned expenditure for fiscal year 2023 stands at SAR1,114 billion, with a continued focus on promoting economic growth and improving spending efficiency. The government also remains committed to spending on education, healthcare and social development. Reflecting its focus on Vision 2030 objectives; these spending components remain important in supporting objectives such as a better quality of life and a diversified economy.

Total public revenues are forecast to reach SAR1,130 billion in 2023, remaining high amid a healthy domestic economic expansion while also remaining high international energy prices. Tax revenues are expected to represent 28.5% of total revenues in 2023. The budget surplus in 2023 is expected to be SAR16 billion, equivalent to a surplus of 0.4% of GDP. It is expected that the public debt stock will stand at SAR951 billion in 2023, or 24.6% of GDP.

High energy prices are positive for both Saudi Arabia‘s sovereign balance sheet and the broader domestic economy. Conversely, any sudden change in the energy markets could weaken this outlook. Despite growing risks abroad, the government’s balance sheet provides a cushion against external economic shocks. 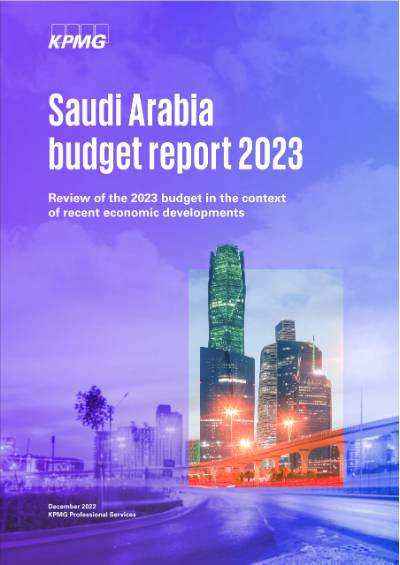