As of 12:00 AM on November 18, 2022, results in a handful of House races were not yet official and the U.S. Senate race in Georgia was headed to a “run-off” election on December 6, 2022. However, it appears that, in the next Congress, Republicans will control the House and Democrats will control the Senate—but with very narrow margins in both cases.* Thus, it appears that, beginning in early January of 2023 (when the next Congress convenes), there will be divided government, with Democrats controlling the White House and the Senate and Republicans controlling the House.

As a general matter, divided government may make passage of major legislation in the next Congress difficult. As explained later in this report, bipartisan support would be needed for legislation to pass both chambers of Congress and to be signed into law by the president—but reaching agreement on significant legislation that has bipartisan support could be challenging in both chambers. Thus, although it is possible for Congress to pass some changes to tax law on a bipartisan basis, enacting major changes in tax policy could face significant hurdles.

Read a November 2022 report [PDF 793 KB] (14 pages) prepared by KPMG LLP that provides preliminary observations regarding the potential tax legislative agenda in the next Congress (i.e., the Congress that convenes on January 3, 2023)—as well as what tax issues might be considered this year during the “lame duck” session of the current Congress (i.e., the period between the elections and the end of the current Congress).

* Election results in this report are based on widely reported results from major news sources. 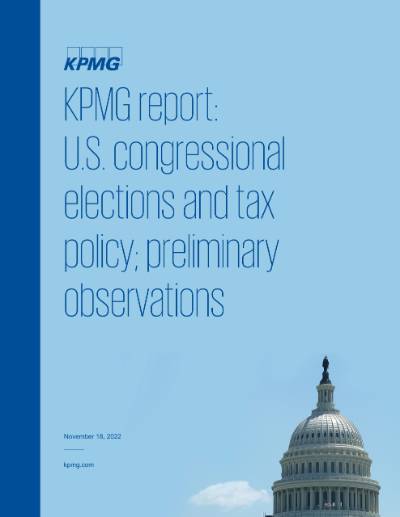 The KPMG name and logo are trademarks used under license by the independent member firms of the KPMG global organization. KPMG International Limited is a private English company limited by guarantee and does not provide services to clients. No member firm has any authority to obligate or bind KPMG International or any other member firm vis-à-vis third parties, nor does KPMG International have any such authority to obligate or bind any member firm. The information contained herein is of a general nature and is not intended to address the circumstances of any particular individual or entity. Although we endeavor to provide accurate and timely information, there can be no guarantee that such information is accurate as of the date it is received or that it will continue to be accurate in the future. No one should act on such information without appropriate professional advice after a thorough examination of the particular situation. For more information, contact KPMG's Federal Tax Legislative and Regulatory Services Group at: + 1 202 533 3712, 1801 K Street NW, Washington, DC 20006.