Overview over the latest deal trends in the Nordic region and our activities in KPMG Deal Advisory.

Overview over the latest deal trends in the Nordic region.

Welcome to the third edition of the year of KPMG’s Nordic Deal Trend Report covering M&A activity across the region in Q3 2022. Looking into the coming winter, considering what has happened on the European continent this year so far, it is no surprise that we feel gloomy about developments in society at large. Russia’s war on Ukraine tolls on, inflation and interest rates soar, energy prices skyrocket and we will, most likely, not be able to cover our energy consumption throughout the cold winter months ahead of us.

All that being said, while at the same time looking into announced M&A deals in the Nordics, it is remarkable that we seem to be looking into a much more positive story. Agreed, number of announced deals in the third quarter compared to that of last year seem somewhat weaker – in Q3 2022, 392 have until now been announced, compared to 666 a year ago. Remember, though, that there is a delay in announcements – meaning that the Q3 figure will increase in the period to follow end of the quarter. 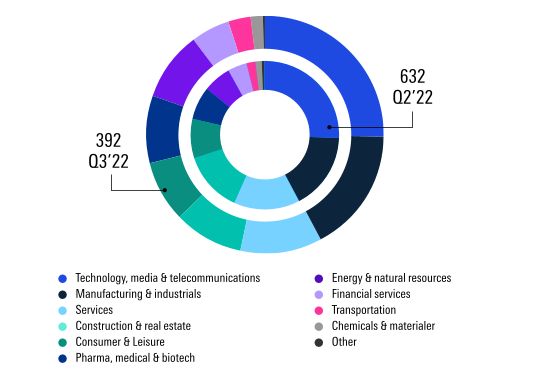 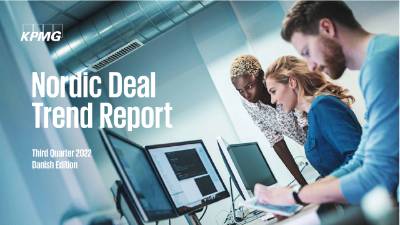 Get insight into the latest trends in the nordic region. Download the report here (1.5 MB).

Get insight into the latest trends in the nordic region. Download the report here (1.5 MB).

Looking into the sector composition of deals, notably, nothing much has shifted there. Tech transactions still make up about 25% of total announced deals, followed by manufacturing, services, real estate and consumer goods. In total, the five largest sectors make up three quarters of all deals – business as usual there. Should we make one small note, it could be that deals in the energy space have ramped up their share of total to about 10%. Expectedly, with how things are developing in society around us and there is an increased focus on being energy self-sufficient, this share of total could increase even further in the next 6–12 months.

On an overall note, following the unusually high deal volumes of last year, we have until now not seen the downward spiral in Nordic M&A that many feared. We still seem to be resilient to a certain extent to what goes on around us in the world and, in particular, on our continent and signs in the market show us that there is still a fair amount of deals in the pipeline going into the fourth and final quarter of the year.

Look forward to seeing what the coming winter has in store for us from a deals perspective.

We offer assistance for all aspects of the M&A process.

Overview over the latest trends in the Nordic region.

STG's integration of Agio has created synergies and strengthened the value chain.

Our team is cross-functional and carries experience from multiple sectors.