As part of their responsibility to promote active citizenship, volunteers from the NGO JCI Malta, in collaboration with staff from Concept Stadium and KPMG in Malta joined forces on Saturday 25th June to give a helping hand at St. Joseph Home for boys in St. Venera. 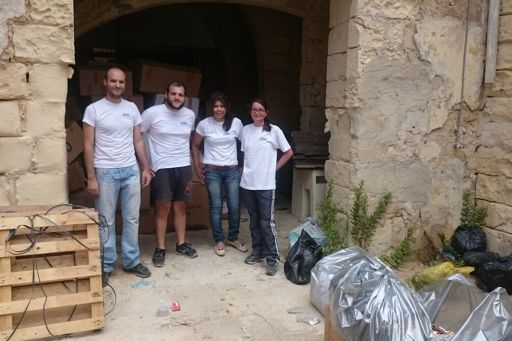 Our commitment to corporate citizenship is embedded in our corporate culture and has progressively morphed itself into our corporate being and soul. Being committed to our communities’ is one of the firm’s values and we endeavour to live that value in the way we conduct business and in the way we do things. Together, we can truly make a difference and make a positive and lasting impact

“We called the event ‘Collective Social Responsibility Day’ because we believe that it is high time we work collectively, beyond corporate and voluntary boundaries to bring about positive change in our communities” said Clayton Mercieca, President of JCI Malta.

In total, a group of around 30 volunteers dedicated a chunk of their Saturday clearing out rubble that resulted from the refurbishment that the home is currently undergoing, in order to better facilitate the needs of its residents. This exercise also included clearing out and organising the garages, where goods, destined to be sent to the missions in Peru, is stored.

“For many of these volunteers it was no easy task as they occupy office jobs but nonetheless a great stress reliever” a member of JCI Malta said.

Whereas for the marketing boutique agency the Concept Stadium, “Corporate Social Responsibility has become central to the game plan of the best companies and at the Concept Stadium this is no exception. We believe that CSR goes beyond merely donating money to charity once in a while, but rather it is an abiding philosophy. The task of organisations is to incorporate CSR into their strategy by conducting organisational activities, such as the said event at St Joseph's home and responding positively to emerging societal priorities. We would like to thank JCI Malta for inviting our team to contribute".

In addition, members of JCI Malta, The Concept Stadium and KPMG in Malta will reimburse the Home for expenses related to the hiring of skips on the day.