The Global Profiles of the Fraudster

The Global Profiles of the Fraudster 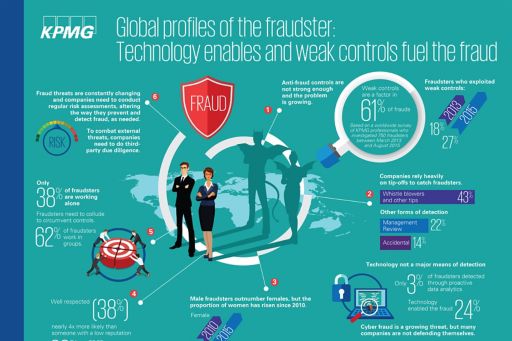 According to a recent report by KPMG International, technology was found to be a significant enabler for a quarter of the 750 fraudsters investigated by forensic specialists across 81 countries. By contrast, the Global Profiles of the Fraudster report reveals that proactive analytics plays an astonishingly minor role in combating fraud, with only 3% of the fraudsters being detected in this manner.

Data was gathered from fraud investigations conducted by KPMG member firms’ forensic specialists in Europe, Middle East and Africa (EMA), the Americas, and Asia-Pacific between March 2013 and August 2015. KPMG analyzed a total of 750 fraudsters who were involved in acts committed in 78 countries. The survey examined “white collar” crime investigations conducted across the regions where the perpetrator was known and detailed contextual information on the crime available. It incorporates the observations and views of KPMG Investigations leaders in 81 countries across the world. The report builds on a similar study conducted in 2013.

Tech-savvy fraudsters are using technology in a variety of ways to perpetrate frauds. In these instances where fraudsters are using technology, about 24% entailed the creation of false or misleading information in accounting records, 20% involved fraudsters providing false or misleading information via email or another messaging platform and 13% involved perpetrators abusing permissible access to computer systems.

The New Face of Fraud

Weak internal controls were a factor for 61% of fraudsters and the problem appears to be growing. The number of fraudsters who were able to commit their acts as a result of taking advantage of weak controls rose to 27%, from 18% in the 2013 report.

Even if controls are strong, fraudsters can and do evade them or override them.  Colluders were able to circumvent strong controls in 16% of the cases and an additional 20% recklessly defrauded with no regard for the controls.