The ESG agenda is becoming an increasingly strategic issue for heads of tax, as demonstrated by the focus of investors and regulators on tax transparency and public disclosures. While not so long ago in Denmark, and as is still the case in other countries, heads of tax and investors debated on the need for tax transparency, the conversation here has now moved to what exactly to report on, and how the information and data disclosed by companies on their tax affairs should and will be used by investor and other stakeholders.

Recently we gathered to take the debate further and bring in representatives from GRI; heads of tax from leading Danish companies (both listed and unlisted); representatives from the investor community; and fund managers. The event was held under the Chatham House Rule and was attended by 17 participants:

However, some expect that the next focus areas for responsible tax to be:

It was noted as well that, if the Danish market is ahead of its European neighbours on responsible tax and transparency matters, as our recent report shows, it is in part thanks to a form of peer pressure amongst leading Danish companies. In addition, it was recognised that events such as this roundtable, where tax leaders can meet and exchange openly with other stakeholders, contribute to this positive peer pressure.

The first dilemma that was debated was on the merits of the total tax footprint approach for tax reporting, compared to Country-by-Country Reporting (CbCR). It was argued by some participants that the total tax footprint conveys a fuller and more informative picture of a company’s contributions to society, and to the overall tax system. For unlisted and foundation-owned (i.e. privately-owned) companies in particular, with no institutional investors, some participants considered this approach to be better suited to sustainability reporting. It was also noted by some participants that, for companies that are active in mergers & acquisitions, the data reported under the CbCR model will most often be distorted.

Others on the other hand considered that total tax footprint, while indeed useful, was not sufficient in itself, and would always lead to follow-up questions from third-parties on the specific tax contributions in one country or the other. This has led multiple heads of tax around the table to choose to report both their total tax footprint, and their country-by-country tax data. All sides agreed however, that whichever approach was chosen, a narrative explanation was necessary. All investors agreed that they need country-by-country data – but they also recognised that tax transparency is a journey, and cannot be expected from one year to the other.

Most participants also agreed that while tax transparency is key to sustainability reporting, it is not a fool proof tool against criticism and questions from the public or investors. But open and honest communication does give companies the benefit of good faith, and helps discussions to be based on facts and numbers rather than on impressions and beliefs.

In that sense, it was raised as well that businesses should clearly communicate on the more difficult parts of their tax data and tax affairs, and must be mindful that their contributions to the legislative process, and their lobbying activities, are aligned with the commitments they make in their tax policies and reporting.

For the second part of the discussion, participants debated the merits of standardised disclosures compared to mandated reporting.

A first issue that was raised by many, was that definitions of a same concept (e.g. revenue), vary across accounting standards, legal definitions, and reporting standards. The participants therefore quickly agreed that a convergence and standardisation of concepts must be achieved, to avoid confusion between a company’s different reports and statements, and to allow for better comparison between companies.

It was noted by many that the EU Directive on public CbCR is flawed, not the least because it allows for the aggregation on non-EU activity (except for activity in jurisdictions found in Annex I and Annex II of the EU list of non-cooperative jurisdictions). In that context, investors noted their support for tax reporting in line with GRI 207 – not only as a standard for quantitative reporting, but also because it sets a standard on how and what to report on from a qualitative perspective, on the approach to tax, tax risk management, governance, etc.

It was remarked that, increasingly, investors and the other stakeholders will be interested in finding evidence in the tax reporting that companies comply with their own tax policies, and how they ensure and assess that compliance. Finally, it was recognised that despite its flaws, the EU Directive on public CbCR will raise the bar for many across the EU, even though for leading companies, it might look like a step backwards.

Reflecting back on the discussion, Dave Reubzaet, Director at GRI, said:

“It is great to see how advanced Danish reporting organizations and investors are in designing and implementing sustainable tax, thereby leveraging the GRI 207: Tax 2019 Standard. Tax is seen in the context of business and sustainability strategies and as such contributing to today's societal challenges.”

We thank all the participants for their participation in this roundtable event, and for contributing to the improvement of tax transparency reporting by sharing their knowledge, insights, and experience.

To view the appendix sent to participants ahead of the roundtable, please view the "Downloads" panel on the righthand side of the page.

To tackle these questions, a group of heads of tax, investors, and fund managers from leading Danish companies, as well as Dave Reubzaet, Director at GRI, were convened by us in the fall of 2022 — a short report of the event can be found right below. 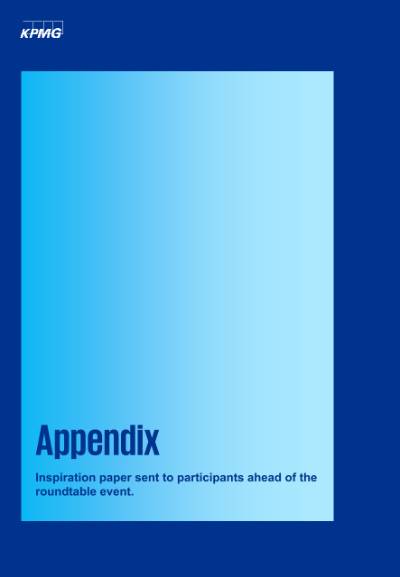 Appendix: Tax and ESG - The view in Denmark

Inspiration paper sent to participants ahead of the roundtable event.

Appendix: Tax and ESG - The view in Denmark

Inspiration paper sent to participants ahead of the roundtable event.

Together with the CSR Forum, we offer Tax Directors and Tax Managers a confidential space where we together build a common professional capacity that strengthens the individual's practice in their own company.

Together with the CSR Forum, we offer Tax Directors and Tax Managers a confidential space where we together build a common professional capacity that strengthens the individual's practice in their own company.

Receive Responsible Tax Matters directly in your inbox! Register for our newsletter here.

Receive Responsible Tax Matters directly in your inbox! Register for our newsletter here.

If you have any questions, feel free to contact us