On 20 December 2021, the OECD/G20 Inclusive Framework on Base Erosion and Profit Shifting, involving 137 countries, released Model Globe Rules under Pillar 2. The document contains 70 pages, 15 of which are definitions, that are the rules for a Global Minimum Tax at 15% for Multi-national Enterprises (MNEs) with a turnover of more than €750 million. It is anticipated that a document providing further commentary on the rules will be released early next year. The model rules released on 20 December differ from the original Blueprint on Pillar 2 from October 2020 in significant ways.

The adoption of the new rules is based on a ‘common approach’ which means that jurisdictions are not required to adopt the rules, but if they choose to do so, they will implement the rules consistently with the model.

The rules are due to be brought into law in each participating jurisdiction through domestic law changes in 2022, to be effective in 2023 for the Income Inclusion Rule (IIR), and 2024 for the Under-Taxed Payments Rule (UTPR). 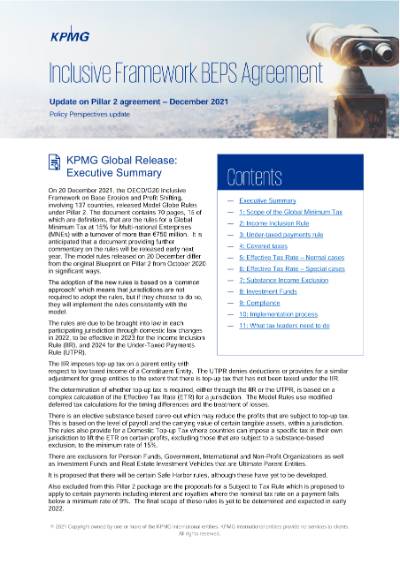 WHAT'S NEW? This Model has added a new concept of domestic top-up tax. This allows a jurisdiction to introduce a rule, which effectively duplicates the Model for top-up tax, but ensures that the tax is collected by that local jurisdiction and is not ceded to another jurisdiction under either the IIR or the UTPR. Assuming low-tax jurisdictions take this path, it may reduce the complexity of the rules in many circumstances while achieving the goal of the Pillar 2 project of providing a floor for tax competition.

Are you prepared for the global tax reform?