New Brunswick has announced that it is reducing its personal income tax rates for 2023 and beyond, as well as accelerating its plan to reduce certain property tax rates. The province’s plan to decrease certain property tax rates over a three-year period was previously announced in New Brunswick’s 2022 budget. However, the province did not announce any changes to personal tax rates at that time. The bills that include these amendments were introduced on November 1, 2022 and are making their way through the provincial legislative process. 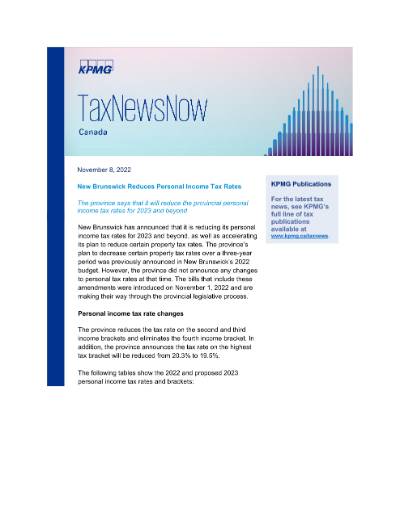 Information is current to November 7, 2022. The information contained in this publication is of a general nature and is not intended to address the circumstances of any particular individual or entity. Although we endeavour to provide accurate and timely information, there can be no guarantee that such information is accurate as of the date it is received or that it will continue to be accurate in the future. No one should act upon such information without appropriate professional advice after a thorough examination of the particular situation. For more information, contact KPMG's National Tax Centre at 416.777.8500

Insights on tax news and trending topics from KPMG's tax professionals in Canada.

Insights on tax news and trending topics from KPMG's tax professionals in Canada.