And actively involved energy consumers. Discover Voices on 2030: the future of energy.

And actively involved energy consumers. Discover Voices on 2030: the future of energy.

Ambitious climate targets, technological innovation, increasing digitalisation, stricter regulations and the changing role of consumers will fundamentally transform the energy sector between now and 2030. A new report from KPMG gathers the insights of key figures from Belgium’s energy world, offering a glimpse at the future of the sector. Voices on 2030: The future of energy suggests a way out of the current energy crisis via increased cooperation between government and other stakeholders, greener and more decentralised energy production and a more active role for consumers in the energy landscape.

The Russian invasion in Ukraine has sparked an explosion in energy prices for families and companies as well as placing a serious spanner in the works of the global economic recovery after the pandemic. The energy shock has underlined the urgent and imposing need for a new energy future, with a move away from fossil fuels. In its report, Voices on 2030: The future of energy released today, KPMG gives the floor to 17 major players from the energy world who share their vision on the future. Which trends and evolutions will drive the energy transition? What steps will be critical to take between now and 2030?

The prominent voices that make up the report represent a broad spectrum of roles in the Belgian energy landscape: from energy producers and providers to members of government and distributors. Among others, Alexander De Croo (Prime Minister), Thierry Saegeman (CEO of Engie), Chris Peeters (CEO of Elia) and Pascal De Buck (CEO of Fluxys) shine a light on the future of energy.

KPMG experts identify 5 crucial areas in which the energy sector will undergo fundamental transformation over the coming years:

1. Governments will play an increasingly important role in driving the energy transition, in close cooperation with key stakeholders

Energy security, affordability and sustainability are high on every country's policy agenda. The war in Ukraine has made it clear just how vital the supply of energy, previously taken for granted by many, is to our society and economy. Consequently, energy will be managed as a key area of strategic national and European interest by the year 2030.

A long-term vision combined with bolder and more stable policies are required to provide market players with a framework enabling investments in green, renewable energy. The energy crisis has generated greater awareness that the energy transition calls for a culture of dialogue and mutual trust.

Globally, countries are trying to shift their energy mix away from fossil fuels to reduce CO2 emissions and ensure security of supply at affordable prices. This requires a diversified mix of energy sources and vectors. Other elements of the energy roadmap include: reducing energy consumption, electrification of primarily transportation and heating, and green molecules.

The electrification of society and industry results in a significant increase in demand for electricity. This in turn poses significant challenges such as the need to boost generation capacity with the right capacity mix while still ensuring affordability and a balanced energy system.

By 2030, a significant portion of Belgium's electricity will be generated by renewable energy sources. Our country plays a pioneering role in offshore wind energy, but other renewable energy sources such as solar and onshore wind also make an important contribution to the production of renewable electricity. Our country has also succeeded in increasing its interconnection capacity while remaining vigilant to continue producing enough electricity on its own territory.

The dependence of renewable energy sources on the weather brings an additional challenge to the power grid. Nuclear and gas plants will also be essential to the capacity mix. The former to ensure firm baseload production and the latter to as a back-up in the event of a system imbalance.

The integration of decentralized generation and electrification of transport and heat means that significant investments will be needed in distribution networks in the future. Indeed, the grid was not initially designed for these new uses and will therefore need a significant upgrade.

In 2030 there will still be certain forms of energy consumption that cannot be easily electrified, such as heavy transport or certain industrial processes. These sectors will be forced to transition to hydrogen or other green molecules to ensure greener energy consumption.

3. Consumers will play an active role in the future energy landscape

High and volatile energy prices have led to increased consumer awareness. More than ever, both households and companies are aware of their energy consumption and its financial and environmental impact. Those consumers are also more likely to produce their own electricity as "prosumers." They strive to maximize their auto-consumption and for this they need data and tools to gain insights into their consumption and production profiles. This new information also allows them to shave their peaks and reduce their electricity bills. Especially industrial consumers are also helping to balance the grid by providing flexibility through "demand side management."

The changing role of energy consumers means that energy suppliers will have to significantly adapt their offer to meet these new needs. They will have to provide more customized services through interactive data platforms, apps, energy management systems and flexibility services.

4. Data as a new fuel for the future energy system

The energy system of the future will be highly digitised, more intelligent and more integrated. As such, it will also generate significantly larger amounts of data. This data has the capacity to make energy consumption more efficient and driven in part by automation and apps that manage millions of devices in consumers' homes including electric vehicles, heat pumps, electric heaters and air conditioners. Machine learning and artificial intelligence play an important role in determining consumer behaviour and providing flexibility to the grid.

Improved near-real-time visibility on the energy system and accessibility of information through online platforms provide opportunities for new challengers to established players on the energy market. They will offer added value through more efficient, cost-effective and customised energy services.

Climate challenges along with the need for energy independence and security of supply mean that the energy sector will be at the forefront of decarbonising the economy. In 2030, much of Belgium's energy consumption will come from green sources such as wind and solar. However, green gas such as biogas, hydrogen and its derivatives will also play an increasingly important role.

Jorn De Neve, Head of Advisory and Head of Energy and Natural Resources Sector at KPMG in Belgium predicts:

"The war in Ukraine and the current energy crisis have put security of energy supply back at the top of the geopolitical agenda. Moreover, they have underlined that energy is a critical component of our social and economic prosperity. The Voices on 2030 report shows that the need to accelerate decarbonisation and create a new energy future have never been more urgent. We can and must do more. All our voices are in agreement: to achieve our goals, all stakeholders will need to work together – at national, European and global level. We need an all-hands-on-deck approach to future-proof our solutions for 2030.”

“As a global firm, we have a critical role to play at KPMG in addressing today's most pressing challenges. Energy is a subject that concerns us all, including households and industries. This report is a result of that commitment to bringing leaders together to stimulate dialogue and constructive debate on the future of the Belgian energy landscape. So that together, we can bring about a fundamental transformation of the sector." 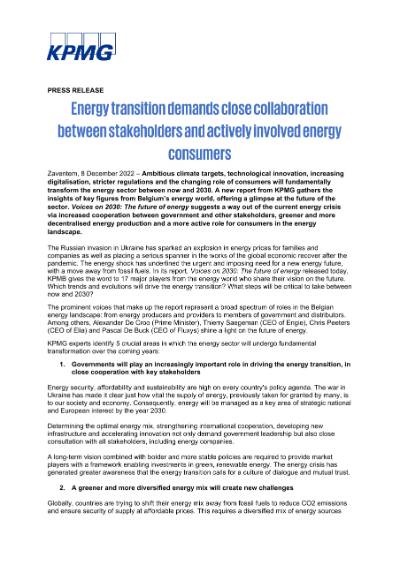 About KPMG in Belgium

With 1,900 employees across the country, KPMG Belgium offers your company personalized and multidisciplinary support in audit, accountancy, tax and legal advice. We also support a wide range of management services: from operational efficiency and cost management, to digital transformations, risk management and deal advice. Our local consultants will support you thanks to their knowledge and through the use of innovative tools to help you face each of your challenges.