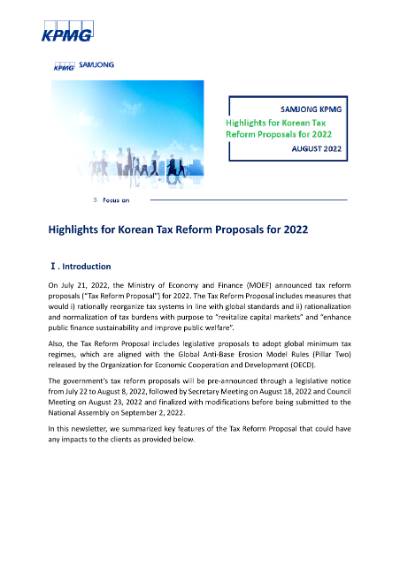 On July 21, 2022, the Ministry of Economy and Finance (MOEF) announced tax reform proposals (“Tax Reform Proposal”) for 2022. The Tax Reform Proposal includes measures that would i) rationally reorganize tax systems in line with global standards and ii) rationalization and normalization of tax burdens with purpose to “revitalize capital markets” and “enhance public finance sustainability and improve public welfare”.

The government’s tax reform proposals will be pre-announced through a legislative notice from July 22 to August 8, 2022, followed by Secretary Meeting on August 18, 2022 and Council Meeting on August 23, 2022 and finalized with modifications before being submitted to the National Assembly on September 2, 2022.

In this newsletter, we summarized key features of the Tax Reform Proposal that could have any impacts to the clients as provided below.

2. Highlights of Draft Tax Amendment in 2022