The 3rd Family Business Forum, organized in Greece by KPMG, has been completed successfully

In his keynote speech, Andreas Andreadis, President of SETE, stressed the need for all players - corporate and non-corporate alike - to acquire a vision and underlined that the memorandums are not the solution for growth, but rather a toolbox that helps the Greek economy. He concluded by noting that growth will come when Greece becomes a leader in the provision of services.

Olaf Leurs, Global Head of Family Business Services, KPMG, presented the annual European ‘Family Business Barometer’ survey, involving family businesses from 23 countries. According to the survey, Greek owners are concerned with competition (37%), but the majority of them turn their attention to political instability (77%). Other issues that concern them are finding talented executives (33%) as well as the drop in their profitability (32%). At the European level, 72% of respondents said they were confident about the future of their family business, while 83% plan to increase turnover next year. In the next part of his speech, Mr. Leurs referred to the
Fourth EU Anti Money Laundering Directive and the changes it will bring to the registering of family business registers.

In his interactive presentation, Dr. Alexander Koeberle-Schmid, Senior Manager Family Business Services, KPMG, offered tips for a successful succession, focusing on how to avoid the usual pitfalls that concern a) the
difficulty of handing over leadership to the next generation, b) intergenerational conflicts, and c) the lack of will and skills among the members of the next generation.

Michel von Boch, Chairman of the Shareholder's Committee, Villeroy & Boch - one of the oldest family
companies in Europe - spoke about how the company is governed, on the basis of the opinions of three councils: family council, supervisory, and management board. It is worth noting that the 9th generation of this company
increased its turnover from EUR 804 million to EUR 820 million within a year.

The event continued with a speech by Kostas Kanaroglou, Vice President and Chief Executive Officer, Cana Laboratories, who talked about the association of family businesses that is currently in the making, with the aim of informing business audiences on issues related to family businesses.

The event ended with a panel discussion, coordinated by Mr. Vangelis Apostolakis, Vice President and Head of Advisory Branch, KPMG, and attended by Messrs. Stathis Varvagiannis, Managing Director, Varvagiannis Beverages, Giannis Varvagiannis, Marketing Manager, Varvagiannis Beverages, Kostas Kanaroglou, CEO, Cana Laboratories and Michel von Boch, Chairman, Shareholder Committee, Villeroy & Boch. The panel participants discussed issues of collaboration among family members and between the family and executives from the market, as well as optimal procedures for taking strategic decisions within a family business. Emphasis was also placed on the need for innovation and the immediate resolution to problems or conflicts before they grow uncontrollably.

The sponsors of the event were AVIS, Calson Wagonlit Travel, Edenred, and Genesis Pharma. 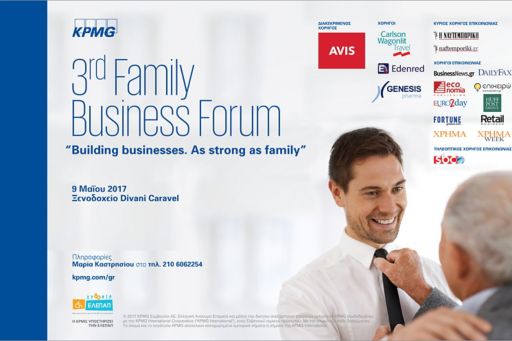