A new era for carried interest in Hong Kong

A new era for carried interest in Hong Kong

In an important development for the Private Equity industry in Asia, the Financial Secretary announced in the 2020-21 Budget that it would introduce a Carried Interest (Carry) tax concession which is designed to further cement Hong Kong as Asia’s leading Private Equity hub. This is a ground-breaking approachby the Government towards ensuring that Hong Kong remains competitive as an international asset management centre.

The Private Equity Industry is a key driver of economic activity in Hong Kong, and its importance was acknowledged by the Financial Secretary in Hong Kong in the recent 2020-21 Budget. The industry directly and indirectly employs a substantial number of people in Hong Kong associated with investing, managing and servicing the PE sector.

Notwithstanding the Government’s good efforts to promote the funds industry, the continuing uncertainty surrounding the taxation of Carry has impinged on Hong Kong’s attractiveness as a PE hub.

Carry has developed into a contentious issue in Hong Kong due to the IRD’s tax treatment of Carry over the last few years, which has been at odds with the views of the industry.

The IRD’s position in Departmental Interpretation & Practice Note 51 that Carried Interest can be attributed to the manager or advisor in Hong Kong and treated as profits derived from management or advisory services in Hong Kong.  This view appears to have been influenced by the way in which Hedge Funds generate Performance Fees, which at first glance is similar in appearance to that of Carried Interest.

For many Hedge Funds, performance fees are structured as a fee and taxed in the same way as management fees. However, for most other investment fund asset classes such as Private equity, Real Estate and Infrastructure funds, Carried Interest represents a share of the underlying investment gains that is distributed as an allocation from the fund, similar to the way in which investment returns are distributed to other Limited Partners (LPs). The investment returns to such LPs are exempt from tax in Hong Kong.

Hence, regardless of the type of fund, the IRD’s view is that Carry should be treated as a fee and subject to tax in the hands of the manager or the advisor operating in Hong Kong. In practice, the amount taxed by the IRD is determined based on a transfer pricing analysis to determine how much of the ‘fee’ relates to functions performed in Hong Kong.

In contrast, our view based on current tax law in Hong Kong is that genuine Carried Interest in a typical PE fund structure is an investment return to the General Partner (GP) and is legally – and in essence – the same nature as returns received by LPs in the fund.

Similar to other joint venture arrangements, a PE partnership structure is a risk/reward proposition for the GP and LPs alike whereby both parties contribute capital into the fund with returns contingent on making profits from the realisation of investments. The fund structures used are not a Hong Kong invention; rather, they have been developed overseas and adopted in Hong Kong to be consistent with investor expectations.  In such arrangements, the profits distributed and shared between the LPs and GPs are treated the same for tax purposes.

In light of the impending LPF regime designed to encourage fund managers to domicile their funds in Hong Kong, the Government has announced that it will look at introducing a new tax concession for Carried Interest.

The Government has not stated what taxation model it has in mind for Carried Interest, although we expect consultation on this to take place shortly.  The model could conceivably be in the form of a full or partial exemption from tax on carry distributions, or simply reflect how carry should be taxed under the existing tax provisions for grants and other awards.  The proposed model will become clearer during the consultation process.

However, for this initiative to be effective it is imperative that the Government engages with the PE industry before finalising any such legislation.  If the provisions fall short of what is necessary to arrest the increasing trend of funds establishing operations elsewhere such as in Singapore, Hong Kong’s position as a leading PE hub could be impacted.

When consulting with the PE industry it is hoped that the Government acknowledges the nature of a PE fund and does not start from the premise that Carried Interest arrangements are tax avoidance schemes.  With the heightened interest that both existing and new funds are showing in establishing funds away from the traditional fund centres, it is imperative to get the policy mix right to ensure that Hong Kong remains a leading private equity hub. 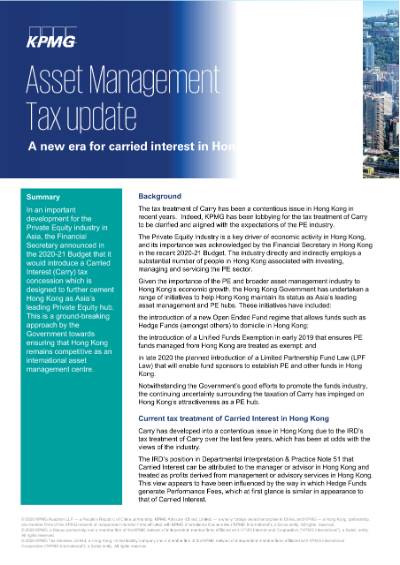 A new era for Carried Interest in Hong Kong

A new era for Carried Interest in Hong Kong