$107.8 billion in investment, according to KPMG’s Pulse of Fintech.

$107.8 billion in investment, according to KPMG’s Pulse of Fintech.

According to the H1’22 edition of KPMG’s Pulse of Fintech, the Asia-Pacific region saw total fintech investment more than double - from $19.2 billion in H2’21 to a record $41.8 billion in H1’22 - with the $27.9 billion acquisition of Australia-based Afterpay by Block accounting for more than half of this total. Meanwhile, both the Americas and EMEA regions saw fintech investment dip - from $59.7 billion to $39.4 billion and from $31.6 billion to $26.6 billion respectively.

VC investment also declined between H2’21 and H1’22 - from $66.5 billion to $52.6 billion. Compared to all periods outside of 2021, the amount was incredibly robust. The Americas accounted for the largest amount of VC funding ($27.2 billion), while EMEA set a new record high for a six-month period ($16.6 billion), led by the world’s two largest raises during the period: a $1.1billion raise by Germany-based Trade Republic and a $1 billion raise by UK-based Checkout.com.

The payments space remained very hot in H1’22, with $43.6 billion of investment. Despite major market challenges, crypto and blockchain attracted the second highest amount of funding from a sector perspective ($14.2 billion).

“Belgian fintechs have become increasingly visible to international investors and thus have access to a more diverse funding pool,” said Dave Remue, Head of Fintech at KPMG in Belgium.  “This trend is to continue.  Success stories such as Clear2Pay, Posios, Collibra, and Odoo, which have grown into international unicorns, have brought a wider range of investors looking for the next unicorn.”

“2021 was a banner year for the fintech market globally, which makes the first half of 2022 seem slow by comparison,” said Anton Ruddenklau, Global Head of Financial Services Innovation and Fintech, KPMG International. “But in reality, many sectors within the fintech market have shown strength and resilience. While the fintech market will likely be quite challenged in H2’22 due to global uncertainty and broader economic concerns, fintechs will likely continue to attract significant attention and investment - if at lower levels than last year.”

Fintech investment in the Asia-Pacific region soared to an annual record high of $41.8 billion with six months left in 2022, driven by Block’s $27.9 billion acquisition of Australia-based Afterpay. The region saw several other large M&A deals, including the $1 billion merger of Superhero and Swiftx in Australia, and the $2.1 billion buyout of Yayoi by KKR in Japan. VC investment was spread throughout the region, including a $690 million raise by Singapore-based Coda Payments, a $300 million raise by Indonesia-based Xendit, and $270 million and $237 million raises by India-based fintechs Stashfin and Oxyzo. Fintech investment in China remained soft in H1’22, with the largest fintech deal in the country a $140 million raise by Fenbeitong.

Investment in the payments space was incredibly strong in H1’22, accounting for $43.6 billion compared to the $60.3 billion seen during all of 2021. In addition to the mega acquisition of Afterpay by Block (formerly Square) for $27.9 billion, the payments space also saw the $2.6 billion buyout of Bottomline Technologies by PE firm Thomas Bravo, and a $1 billion VC raise by UK-based Checkout.com.

Interest in cybersecurity remained very strong at mid-year, with $1.2 billion in investment globally, including four big raises in the US: a $550 million raise by Fireblocks, a $170 million raise by Chainalysis, and $100 million raises by TokenEx and Cowbell Cyber. In March, Google also announced plans to acquire incidence response company Mandiant for $5.2 billion. If completed, the deal would singlehandedly break 2021’s record $5.2 billion in global cybersecurity investment.

H1’22 saw numerous challenges affect the broader investment market, including geopolitical uncertainty, turbulence in the public markets, and rising inflation and interest rates. With no end in sight to many of these challenges, the fintech market could see activity slowing considerably - particularly compared to the major record highs seen in 2021. While fintech investment is expected to remain somewhat resilient - particularly in areas like B2B payments, cybersecurity automation, and data-driven analytics - deals could take longer to complete as investors become more critical of opportunities.

“With valuations coming under pressure, fintech investors are going to enhance their focus on cash flow, revenue growth, and profitability - which could make it more difficult for some fintechs to raise funds,” said Anton. “M&A activity, however, could see an uptick as struggling fintechs look to sell rather than holding a downround, corporate and PE investors move to take advantage of better pricing, and well-capitalized fintechs look to take out the competition.” 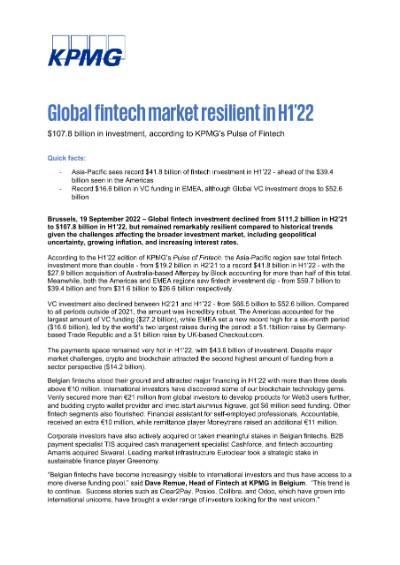 The global fintech market remained resilient in H1’22 and counted for $107.8 billion in investment.

The global fintech market remained resilient in H1’22 and counted for $107.8 billion in investment.

With 1,600 employees across the country, KPMG Belgium offers your company personalized and multidisciplinary support in audit, accountancy, tax and legal advice. We also support a wide range of management services: from operational efficiency and cost management, to digital transformations, risk management and deal advice. Our local consultants will support you thanks to their knowledge and through the use of innovative tools to help you face each of your challenges.