The movement to combat global warming and climate change.

The movement to combat global warming and climate change has resulted in an increasing number of countries committing to reduced carbon and greenhouse gas emissions over the coming decades.  These commitments generally focus on reaching the ambitious target of zero carbon emissions by around mid-century with six countries having already incorporated net zero carbon targets into law and many more, including South Africa, having similar targets in proposed policy documents or under discussion for adoption.  At the same time the global demand for energy is increasing.

In order to reduce greenhouse gas emissions on the scale required to meet these global ambitions, the world will need to covert its energy generation away from fossil fuel-based sources of energy and into renewable energy sources including solar, wind and hydro.  However, there are a number of barriers that have prevented the large-scale adoption and application of renewable energy.

The first of these has been the variability of supply of energy generated from renewable sources.  Solar panels need sunlight to generate electricity and wind turbines need the wind and, in both cases, when the right environmental factors are not present, no electricity can be produced.  One way to overcome this problem would be to identify an efficient method to store the energy produced during favourable times for use when environmental factors are unfavourable for renewable generation. 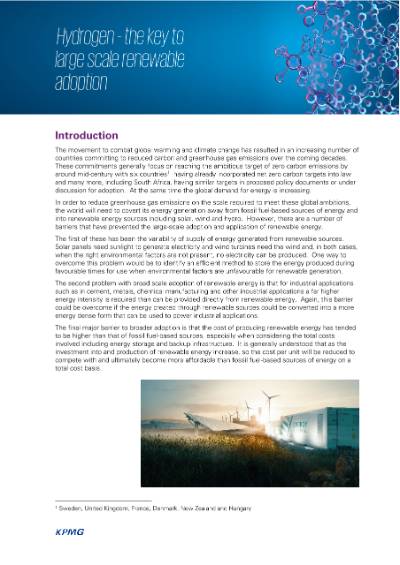