Charting a path for the future.

KPMG Private Enterprise has released its fourth Global Family Business Tax Monitor across 54 jurisdictions to assess the tax costs associated with family business ownership succession, either on retirement or inheritance.

In 2018, when the results of the third edition were released, we noted that for South Africans, both the current family business owners and also the regulators (i.e. National Treasury and the South African Revenue Service), the results were best referred to as concerning.

Similar to the 2018 results, South Africa again has the one of the highest, if not the highest if we consider a family business valued at €10 million, effective tax costs for an individual passing on the ownership in a business to the next generation. What is interesting to note is that passing on ownership through inheritance results in an effective tax rate of 35.6%, whereas passing on ownership through retirement (donation) results in an effective tax rate of 36.5%. From an ownership succession perspective, this is not incentivizing what we generally recommend, to allow for transition while the prior generation is around to share valuable insights, i.e. on retirement.

KPMG Private Enterprise believes the results unfortunately evidence a short-term view on tax collection. Similar to the discussions around a wealth tax, creating such a significant tax cost in the short-term has a negative impact on the long-term benefits of generating perpetual growth of the family business and, in turn, the economy through both job creation and perpetual growth of revenues and tax base to support the economy.

Succession planning is a vital consideration for business families to effectively transfer their business from one generation to the next. We encourage business family owners to consider the 2020 Global Family Business Tax Monitor to understand the global landscape, and ultimately to ensure the tax costs associated with ownership succession are acknowledged and appropriately factored into the succession planning. 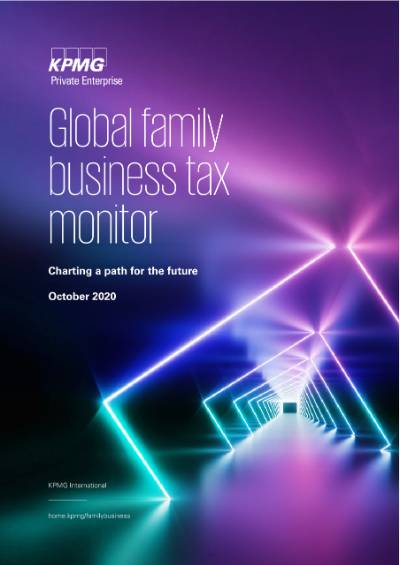 Charting a path for the future

Charting a path for the future

Register now and set up your personalised dashboard around {tag_name} and all the other topics that interest you.