With the growing focus on mitigating climate risks and achieving the Paris Agreement goals for 2050, countries worldwide are realising the importance of decarbonising the transport sector — which accounted for one-fourth of the global greenhouse gas emissions in 2019. ASEAN governments and businesses have a once-in-a-lifetime opportunity to shape a significantly decarbonised land transport sector. COVID-19 has also significantly changed the ways of working and commuting, providing an opportunity to evolve land transport ecosystems in the biggest ASEAN cities.

In many ways, China’s bold stated ambition of net zero by 2060 has been the major catalyst. Japan and Korea followed China with their own net zero goals, setting the tone for decarbonised economic growth in Asia. In transport, the emergence of Electric Vehicles (EVs) is the most important development, with significant capital being committed to the rapid commercialisation of this technology and the value chain to support it. Other nascent technologies like hydrogen hold much promise and will have a vital role to play in decarbonising the transport sector. The entire transport sector is set to be altered beyond recognition in the next few decades with the convergence of the automotive, energy and transport sectors and there will be winners and losers in the geopolitical contest. 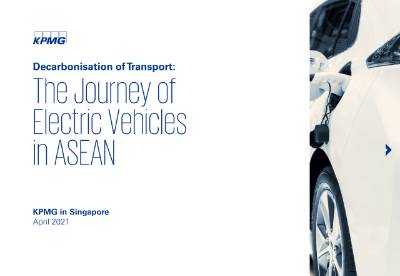 Decarbonisation of Transport: The Journey of Electric Vehicles in ASEAN

Decarbonisation of Transport: The Journey of Electric Vehicles in ASEAN