After a tumultuous twenty months, the global economy is settling into a rhythm and a sense of normalcy. That said, threats as a result of the Covid-19 pandemic remain, of which the Omicron-variant, emerging from Southern Africa is the latest example, while countries in Northern Europe were already re-implementing partial lockdowns and movement restrictions. The further opening up of the Middle East, with the Kuwait as the latest out of the GCC bloc to resume international air travel without major restrictions, have provided economies an opportunity to regroup and start a cautious recovery process. Courtesy of a robust and diligent government strategy, Saudi Arabia’s progress on the inoculation front has been stellar  allowing the Kingdom to refocus on its economic priorities.

The Kingdom’s banking sector has continued to lead the charge towards recovery in the first nine-month period of FY2021. With 6.3% growth in total assets since 31 December 2020 and a nine-months period-on-period increase of 12% in in net income after tax and Zakat (calculated excluding the one-off goodwill impairment of SABB in 2020), the sector continues to post strong results without reporting any single domestically significant corporate credit default. Thanks to a sustained strong growth in mortgage finance, the total lending exposure of Saudi banks to private sector is edging towards SAR 2 trillion mark. In September, the sector’s total deposits crossed the foregoing landmark for the first time. Also worth lauding is a continued decline in net credit loss charges for the sector that started to build up since March 2020. During the nine-month period that ended 30 September, a decline of 18% has been reported relative to same period of FY2020. Despite the inevitable adverse effects of Covid-19, these statistics continue to remind us of the successful initiatives taken by the government, regulators and banks.

A successful completion of merger between National Commercial Bank (NCB) and SAMBA Financial Group into Saudi National Bank (SNB) was also notable during the period. At an effective purchase consideration of SAR 78.5 billion, the merged giant is comfortably placed as the largest commercial bank of Saudi Arabia and the third largest lender in the GCC. However, the one-off merger-related costs of SAR 100 million and post-merger notional ECL pick-up epitomize some of the challenges in mergers of this dimension. Moreover, as part of the applicable accounting standards, the merged entity is required to iteratively monitor identified intangibles and residual goodwill amounting to SAR 28.5 billion.

The recently issued licenses for the first digital banks in Saudi Arabia are a strong reminder of the digital imperative.

Consistent with global trends, the total number of branches across the Saudi banking sector declined by 5% over the last year to under 2,000, while the number of ATMs has increased considerably. The rise of digital banking during the pandemic was certainly a contributing factor to this phenomenon. The recently issued licenses to STC Bank (formerly STC pay) and Saudi Digital Bank as the first digital banks in the country are a strong reminder of the digital imperative and Vision 2030’s objective of increasing non-cash transactions to 70% by 2025.

There has also been a growing focus on cybersecurity and other protocols around stability of technology infrastructure across all banks. Data privacy is now also a sector-wide priority. Full engagement across the bank is key as privacy professionals look to embed privacy into the DNA of business operations and customer engagement. In creating a sustainable and effective data protection strategy, banks should develop a solid framework of best practices and infuse those practices in their procedures and culture.

In our latest CEO Outlook, we noted that CEOs across the globe are responding to a stakeholder desire for ESG programs to fit squarely into an organization’s purpose, with 78% of surveyed CEOs in Saudi Arabia commenting they have seen increased demands from stakeholders, such as investors, regulators and customers, for increased reporting and transparency on ESG issues. Growing exposure to global financial markets and heightened attention from ratings agencies have invigorated Saudi banks on their ESG priorities.

We wish you an insightful read of this edition of our newest Banking pulse quarterly, part of a series of our industry-wide endeavor to share and seek insights in the banking space. 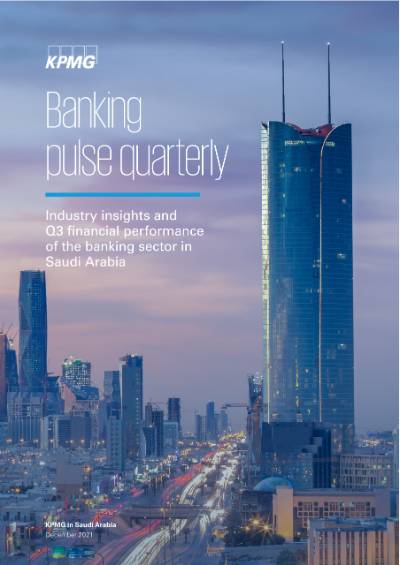