On 8 October 2021 the Inclusive Framework (IF) on Base Erosion and Profit Shifting released details of an agreement which refines the statement of 1 July 2021. In terms of consensus, 136 of the 140 Inclusive Framework countries have agreed to this release. The four countries that have not signed up are Kenya, Nigeria, Pakistan and Sri Lanka.

It is titled Statement on a Two-Pillar Solution to Address the Tax Challenges Arising from the Digitalisation of the Economy and is 8 pages in length.

Consistent with the statement of 1 July, covered previously, two Pillars are covered.  Pillar 1 deals with the reallocation of certain profits from very large Mutlinational Enterprises (MNEs) to market jurisdictions. Pillar 2 deals with a Global Minimum Tax.

The statement annex includes a detailed implementation plan with timelines for the development of detailed rules, for legislative implementation, and target effective dates.

Pillar 1 provides for new profit allocation and nexus rules for MNEs that are in scope. These rules are embodied in “Amount A”. The statement of 8 October confirms that the new rules will apply to MNEs with worldwide revenue greater than €20 billion and profitability above 10%.  The 1 July statement indicated that the allocation under Amount A would be between 20% and 30%.  The agreement on 8 October states that this amount will be 25%.  It is estimated that Pillar 1 will result in the reallocation of  USD125 billion of profit.

Amount A requires the development of sourcing rules and a revenue-based allocation key.  Details of these rules are not contained in the statement although the statement confirms that jurisdctions from which €1m or more revenue are earned will receive an allocation.  This is reduced to €250,000 for jurisdictions with less than €40 billion in GDP.

The statement confirms that jurisdictions will be subject to mandatory binding arbitration with only a limited number of less developed countries permitted to use an elective mechanism.

Extractive industries and regulated financial services remain outside of Amount A although there is no further detail of the scope of these exclusions. Nor is there any further detail on the mechanism to reduce double tax and which entities within an MNE group are responsible for payment of any Amount A liability.

The statement commits countries to “use all efforts” to enact legislation and ratify a proposed Multilateral Convention on Amount A in Pillar 1 “within the context of their legislative process”.

Details of a proposal for Amount B which deals with standard remuneration for in-country “baseline” marketing and distribution activities will be developed in 2022, consistent with the statement of 1 July 2021.

Pillar 2 deals with new Global Anti-Base Erosion (or GloBE) or Global Minimum Tax rules.  The agreed global minimum tax rate is 15%.   The 1 July statement indicated that it would be ‘at least 15%’.

UTPR exclusion for MNEs in their initial phase

There is an Income Inclusion Rule (IIR), which imposes top-up tax on a parent entity in respect of low taxed income of constituent entities within an MNE group, and a supporting Undertaxed Payment Rule (UTPR) which denies tax deductions, or requires an equivalent adjustment to the extent the low tax income of a constituent entity is not subject to tax under an IIR.

The rules will provide for an exclusion from the UTPR for MNEs in the initial phase of their international activity.  This is defined as those MNEs that have a maximum of EUR 50 million tangible assets abroad and that operate in no more than 5 other jurisdictions. This exclusion is limited to a period of 5 years after the MNE comes into the scope of the GloBE rules for the first time. For MNEs that are in scope of the GloBE rules when they come into effect the period of 5 years will start at the time the UTPR rules come into effect.

As envisaged in the 1 July statement, the GloBE Rules will apply to MNEs with revenues exceeding the €750 million threshold as determined under BEPS Action 13 (country by country reporting). Countries remain free to apply the IIR to MNEs headquartered in their countries whose revenue fall below this threshold.

Exclusions are provided from the GloBE Rules for government entities, international organizations, non-profit organizations, pension funds or investment funds that are ultimate parent entities (UPE) of an MNE group or any holding vehicles used by such entities, organizations or funds.  International shipping is excluded, but not airlines. This is consistent with the 1 July statement.

The GloBE Rules are described to impose a top-up tax using an effective tax rate test that is calculated on a jurisdictional basis using a common definition of covered taxes and a tax base determined by reference to financial accounting income, with agreed adjustments consistent with the tax policy objectives of Pillar Two and mechanisms to address timing differences.   There is no discussion on how these timing differences will be determined and treated.

Consistent with the 1 July statement, the new agreement provides that in respect of existing distribution tax systems, there will be no top-up tax liability if earnings are distributed within four years and taxed at or above the minimum level.

A formulaic substance carve-out is provided that would exclude an amount of income from the GloBE Rules, determined as a mark-up on the carrying value of tangible assets and payroll. The mark-ups are initially 8% for tangible assets and 10% for payroll and will taper down over a 10-year period to 5% for both.

The statement confirms that the implementation framework will include safe harbors but does not provide details of these mechanisms.

Consistent with the July statement, the statement confirms that the US GILTI regime will co-exist with the GloBE Rules, to ensure a level playing field, but does not provide additional details of how this will occur.

The statement confirms the importance of the STTR to developing countries and provides that IF member jurisdictions that apply nominal corporate income tax rates below the STTR minimum rate to interest, royalties and a defined set of other payments (subject to further discussion) would incorporate the STTR into their bilateral treaties with developing IF members when requested to do so.

The statement defines ‘developing countries’ as those with GNI per capital of $12,535 or less in 2019.

The detailed implementation plan in the annex to the statement sets out key milestones for the finalization of the detailed rules, as well as the target timelines for legislation/treaties to be implemented/ratified and for the rules to be in effect.

In terms of roll out timelines, for all elements of the rules (i.e. Amount A, GloBE rules, STTR, Amount B, DST rollback) the implementation plan notes that IF members are fully committed to use all efforts within the context of their legislative process in achieving the timeline goals.

For Amount A it is noted that implementation through the MLC is with a view to allowing it to come into effect in 2023. This is noted to occur once a critical mass of jurisdictions has ratified it, and IF jurisdictions signing the MLC will be expected to ratify it as soon as possible. The critical mass threshold is not yet defined and is to be set out in the MLC in early 2022, so it remains to be seen whether Amount A allocations will start from 2023.

The Pillar Two rules are, per the IF statement, to be brought into law in 2022 to be effective in 2023 (i.e. IIR and STTR) with the UTPR coming into effect in 2024. As noted, it is recognized that countries face limitations in speed of their legislative processes, so it remains to be seen by what stage a significant number of IF members have the rules in place. The timelines for the implementation of Amount B and the rollback of DSTs and other relevant similar measures are not yet clarified.

There are a large number of open issues. These include:

The statement provides that work will progress in consultation with stakeholders within the constraint of the timeframes for implementation.

US and EU highlights

The European Commission has stated that a consistent implementation of Pillar 1 and 2 in all EU Member States, ensuring compatibility with EU law, requires new EU Directives. This EU legislative route could be launched in the first quarter of 2022. Adoption of EU Directives implementing the new global standards would be subject to unanimous agreement among EU Member States, not all of which signed the OECD IF Statement in July 2021.

After intense EU coordination efforts and OECD IF cooperation to find compromise solutions to address the concerns of especially Hungary (substance-based carve-out), Ireland (minimum rate) and Estonia (distribution-based corporate tax), it now seems that all EU Member States could be willing to adopt the new global rules in the form of EU Directives (assuming that Cyprus – not an OECD IF member – is able to join the consensus group in the EU).

Implementation of Pillars 1 and 2 in the US will require legislative action.  The current Administration has put forth a budget that includes several proposals to reform current US tax rules in alignment with Pillar 2 of the OECD inclusive framework agreement.  The tax writing committees in the US Congress are still debating the contours of a potential tax reform package, but early proposals, while not adopting many of the Administration’s budget proposals, also include provisions that appear aligned with the consensus approach to Pillar 2 including raising the GILTI rate to just above 15 percent and adopting a jurisdictional approach.

Subject to the ability to reach a political consensus in the US on a broader tax and infrastructure package, implementing tax legislation could be enacted by the end of this year or beginning of 2022. Thus far, neither the Administration nor Congressional tax writers have put forth legislative language or proposals in connection with Pillar 1.  This is likely because several key aspects of Pillar 1 were yet to be agreed.   In earlier public statements, Secretary Yellen signaled that implementation of Pillar 1 would be addressed in 2022.

What tax leaders can do

The framework for reforms agreed will have a wide-ranging effect on many MNEs. Given the ambitious timeline for implementation, it is important that potentially impacted businesses understand what is coming and prepare for the resulting changes. Tracking the timeline for further developments provided below, MNEs should:

1. Monitor Developments. These details will be important to the operation and impact of the new rules.

2. Consultation.  The Inclusvive Framework will be accepting feedback from stakeholders and tax leaders should consider feeding in issues to the OECD.

3. Model and Assess Impact. The reforms being considered are complex and potentially will intersect with existing domestic rules. It will be important for MNEs to use appropriate assessment tools to model impacts, evaluate interdependencies and prevent double taxation or other inadvertent impacts.

4. Track Implementation. Implementation of agreed reforms requires legislative adoption and, where relevant, ratification of a signed multilateral instrument. Given the variations in legislative and parliamentary processes across jurisdictions, MNEs will need to understand the timelines and relevant requirements of the various processes and track when laws in different jurisdictions come into effect. 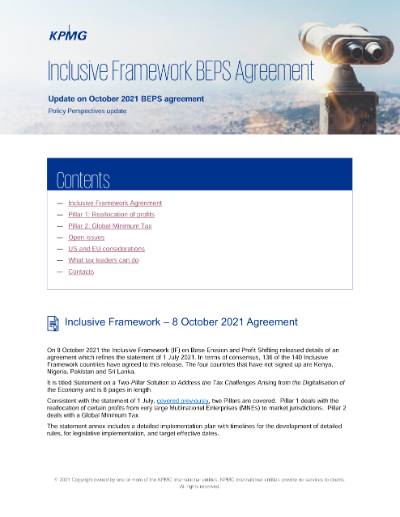