The COVID-19 pandemic has triggered disruption in the world economies and most industries. However, steps taken by the government of Saudi Arabia by providing relief to insurers of their obligations and opting to pay itself for the treatment of all COVID-19 patients including citizens, residents together with two-month extensions in motor policies has not only impacted favorably to the insurers, but also the policy holders.

The insurance industry in Saudi Arabi reported a growth of 2.7% in terms of gross written premiums and 96.1% in net profit after zakat and income tax over nine months ending 30 September 2020 when compared with the similar period in 2019.

Focusing on the overall performance for the nine months period, the insurance industry’s cumulative net profit after zakat and tax reached to the highest ever amount of SAR 1.32 billion in the nine months reporting a growth of SR 648 million. This represents annualized return on equity of 9.69% against 4.04% compared to same period of 2019. Medical and motor insurance continued to be the highest contributor of GWP. In addition:

These results were duly adjusted for the one-off Premium Deficiency Reserves (PDR) created by the insurers in anticipation of claims arising out of delayed elective medical procedures.

The positive trend is expected to continue during the last quarter of 2020 and the industry is likely to close the financial year on a high. There were no disruptions in business during the last quarter, the extended period of motor insurance has partly been absorbed and medical treatments are coming back to normal. Accordingly, insurance companies are likely to revisit the need of maintaining an adequate PDR.

The overall financial turnaround of the insurance industry in 2020 is a cumulation of government support, persistent efforts by the Saudi Central Bank diligent efforts by insurance companies during unusual times to enhance operational resilience. We have not only observed attempts for strategy refresh but also increased focus on internal capabilities and sustaining margins; in an attempt to foster M&A activities.

The insurance industry will be driven by customer experience, data and technology. Customers increasingly prefer to interact digitally with their insurers, hence digitally-advanced insurers will have greater advantage. On the regulatory front, companies will be expected to enhance their resilience to business risks and remain compliant with evolving requirements in protecting policyholders and shareholders’ interest.

In this report, we have analyzed the financial performance of 32 insurance companies in Saudi Arabia under two sections; Tier I and Tier II companies based on the size of Gross Written Premiums.

We wish you an insightful read of this second edition of our Insurance Pulse Quarterly and we look forward to discussing it with you. 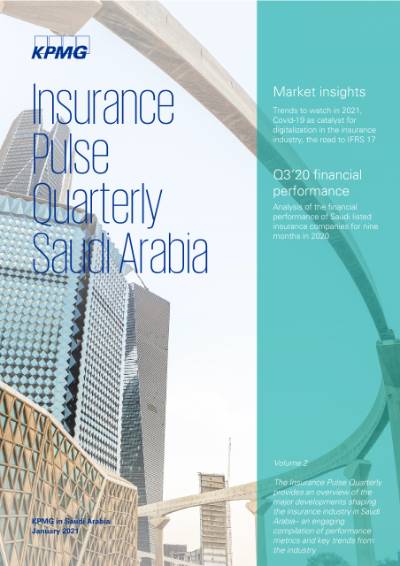