Less than half of the world’s largest companies are providing reporting on ‘social’ and ‘governance’ components of ESG. 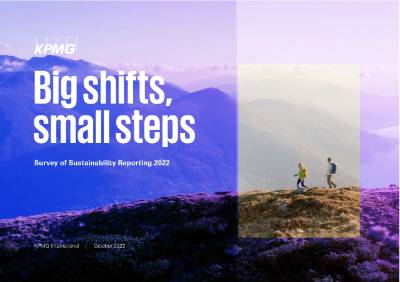 First published in 1993, the KPMG Survey of Sustainability Reporting is produced every two years and this year’s edition provides analysis of the sustainability and Environment, Social and Governance (ESG) reports from 5,800 companies across 58 countries and jurisdictions. The findings released today show that there is still a disconnect between the urgency of addressing climate change and social equity, and the ‘hard results’ provided by businesses.

Meanwhile, there has been a steady and consistent increase in reporting from the so-called N100 (the top 100 companies in each country or jurisdiction analyzed). Ten years ago, around two-thirds of the N100 group of companies provided sustainability reports. The figure now stands at 79 percent.

The latest findings reveal that businesses are increasingly recognizing that they have a role to play in helping to achieve climate targets, with an impressive 71 percent of the N100 and 80 percent of the G250 setting carbon reduction targets. Reassuringly, most companies recognize that they must reduce their own emissions to achieve their carbon targets rather than rely solely on carbon credits. The number of companies reporting against Task Force on Climate-related Financial Disclosures (TCFD) guidance has nearly doubled, leading to better climate disclosure.

However, the report also reveals some key areas where faster progress is required. Only 64 percent of G250 companies formally acknowledge that climate change is a risk to their business, and less than half of companies currently recognize biodiversity loss as a risk.

Sustainability reporting through the ESG lens

This year’s report has also highlighted some further challenges the world’s major companies are facing in reporting on ESG. Among the thousands of reports analyzed, less than half of the world’s largest companies provided reporting on ‘social’ components (e.g. modern slavery; diversity, inclusion and equity; community engagement; and labor issues), despite an increasing awareness of the link between the climate crisis and social inequality. At the same time, less than half of companies disclosed their governance risks (e.g., bribery and anti-corruption, anti-competitive behavior or political contributions.) In addition, only one third of N100 companies have a dedicated member of their leadership team responsible for sustainability and less than one-quarter of these companies link sustainability to compensation among business leadership.

ESG disclosures continue to be overwhelmingly narrative-driven, rather than through the publication of quantitative or financial data on impacts. This is clearly an area for improvement for companies around the world.

On a positive note, around three-quarters of reporting companies conducted materiality assessments and are disclosing material topics.

John McCalla-Leacy, KPMG’s Global Head of ESG, said: “Last year, scientists from the IPCC warned the world was on ‘Code Red’ for human driven global warming. It was followed by a number of commitments from political leaders at COP26. As we head towards COP27, immediate action is now needed to avert human and environmental tragedies on an ever-increasing scale.

“KPMG’s 2022 Survey of Sustainability Reporting reveals regulation is making a difference. My view is that it is critical to provide guidance and direction to companies and help drive cultural change. Business leaders have accepted they have a responsibility and role to play in helping to slow and potentially avert the unfolding crisis. What’s needed more than ever is globally consistent standards from governments and a collective effort from the world’s major companies to report on all aspects of ESG, recognizing the clear links between the environment and wider social equality issues.”

Jennifer Shulman, report co-author and Global Lead for KPMG’s Global ESG Advisory Hub, commented: “The COP26 summit offered the world a human face to the unfolding climate tragedy facing the planet. Representatives from some of the world’s most remote and heavily impacted nations and territories were present to share their story. But, despite that growing recognition of the human side of ESG, our latest survey continues to highlight a real challenge facing the C Suite – which is in how they demonstrate and reflect on their company’s wider societal impact.

“We should start to see some progress over the coming year as organizations like the International Sustainability Standards Board (ISSB) roll out new global standards for reporting. But companies shouldn’t wait to be told. Leadership from the top is essential. The global pandemic and COP26 shone a light on the growing inequalities in society. Many major organizations are responding with proactive action that should be applauded. We’re seeing far greater action on gender equality, pay equity and community impact assessments. It’s time for organizations to be transparent in their reporting to highlight what they’ve achieved and hold themselves to account on areas where further progress is required.”

The Asia Pacific region leads in sustainability reporting, with 89 percent of its companies undertaking it. This is followed by Europe (82 percent), the Americas (74 percent) and the Middle East and Africa (56 percent).

A call to action

New ESG requirements are driving a different perspective and set of conversations in boardrooms, driving business leaders to stretch their thinking and ensure that from the top down they are making strategic decisions that take climate and broader ESG considerations more into account.

The KPMG report outlines the tangible ways businesses can invest in sustainability reporting:

The pressure on businesses to report on non-financial metrics is only expected to grow as regulations evolve. By acting now, companies can make informed choices to drive the change that is much needed and be good corporate citizens in today’s world.

The research on Romania’s top 100 companies ranked by revenue (N100) shows an increase in the number of companies reporting on sustainability or ESG (+ 8 percentage points as compared with the previous edition).

Out of all the companies for which the research was conducted, 74 have disclosed sustainability performance information either in a local report or through group level reporting, which also included data on operations in Romania.

For the KPMG Survey this year, reports released during 2020-2022 were considered. It was noted that out of the total number of companies reporting during this timeframe, 47 disclosed such data through the report of the parent company or within the report of the group they are part of. Moreover, 21 companies have developed and published local reporting and only 6 Romanian private or state-owned entities disclose comprehensive ESG or sustainability related information.

The survey this year highlights the following trends amongst the companies which have released a sustainability report locally:

Ovidiu Popescu, Energy, Sustainability and Climate Change Director, KPMG in Romania, comments:” We are at a critical point in terms of the chain effects caused by climate change. Thus, there is a stringent need for coordinated actions and cooperation across all levels of society.

Beyond the apparent progress registered locally, the survey illustrates an important gap in the current state and maturity of reporting as compared with the regional average. Therefore, it is time for companies to assess in more depth to what extent their business can be resilient in the long term and what actual impact they have on the value chain. More severe reporting requirements and the demand for ESG performance data by various stakeholder groups are important factors. Yet to achieve real change, companies must be prepared for a transformational process resulting in a clearer definition and better alignment of their business goals with their sustainability ones. Reporting must be seen not as a purpose in itself, but as an instrument for monitoring and communication following the implementation of a coherent sustainability strategy.

Thus, depending on the current maturity level as regards managing ESG related issues, the transition will be at a different pace. And those organizations which quickly gain a comprehensive picture of the interdependencies between business processes and ESG will be able to capitalize on new opportunities.

To end on a positive note, the more quickly companies integrate ESG as an essential part of their strategy, the sooner they will be prepared for the future.”

Aurelia Pătulea – Manager, Energy, Sustainability and Climate Change, KPMG in Romania, concludes: ”It can be expected that we will see a positive evolution during the next few years of the trends reflected by the KPMG Survey at European level because we are getting progressively closer to the adoption of the Corporate Sustainability Reporting Directive (CSRD). I believe that it is crucial to shift our perspective towards establishing how the overall CSRD context can be used as guidance to incorporate ESG-related risks and opportunities into corporate strategy and the reporting process, and that we should not merely see application of the CSRD rules as a simple compliance issue.

Companies which fall under the provisions of the Directive,and others, need to focus their efforts particularly closely on double materiality assessment. This is an overaching pillar and the starting point for identifying the material topics at each organization’s level. So its importance should not be underestimated. Another factor that should not be ovelooked is the value and credibility given by the independent verification of the reported data.

If we think that ultimately an ESG or sustainability report is issued to increase transparency, and that the target audience is becoming better and better equipped to critically assess this kind of publication, it is increasingly important for the information which is communicated to be relevant, connected with the sustainability context both globally and at local level, and, in particular, to be comparable.

Consequently, if we see uncertainty as to the importance of considering ESG and sustainability related matters in any particular company, we should reflect on an old proverb: ”Trust arrives on foot but leaves on horseback.”