58 percent of leaders expect a recession to be mild and short. 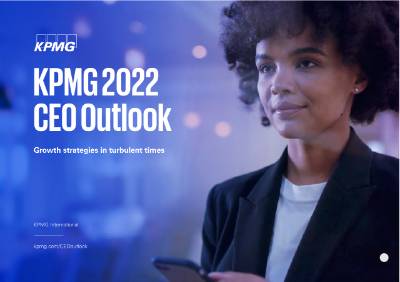 KPMG recently issued its 2022 CEO Outlook, which asked more than 1,300 CEOs at the world’s largest businesses about their strategies and outlook. This has revealed that 58 percent of leaders expect a recession to be mild and short. Fourteen percent of senior executives identify a recession among the most pressing concerns today — up slightly from early 2022 (9 percent), while pandemic fatigue tops the list (15 percent).

Over the next year, more than 8 out of 10 (86 percent) global CEOs anticipate a recession to hit, with 71 percent predicting it will impact company earnings by up to 10 percent. A strong majority of senior executives believe that a recession will disrupt anticipated growth (73 percent). However, three-quarters (76 percent) have already taken precautionary steps ahead of a looming recession.

Bill Thomas, Global Chairman & CEO, KPMG, said: “Once-in-a-generation issues — a global pandemic, geopolitical tensions, inflationary pressures and financial difficulties — have come in short succession and taken a toll on the optimism of global CEOs. While it’s unsurprising the economic climate is now the top concern for business leaders, it’s reassuring to see high levels of confidence among executives in their own companies and their longer-term prospects for growth.

“The events of recent years have created real turbulence for the business community. Our findings should provide some cautious optimism that, in contending with and overcoming these ordeals, executives are emerging more confident in their companies’ resilience and hopefully the markets will follow suit, mitigating some of the greater uncertainties we’ve all felt.”

Hiring freezes and headcount reductions under heavy consideration for CEOs

With continued economic turmoil, there are signs the Great Resignation could be cooling down, with 39 percent of CEOs having already implemented a hiring freeze, and 46 percent considering downsizing their workforce over the next 6 months. However, the three-year view is more optimistic with only 9 percent expecting a further reduced headcount.

In the longer-term, more than a quarter believe that advancing digitalization and business connectivity is also vital to achieving growth objectives over the next 3 years. Seventy-four percent also agree that their organization’s digital and ESG strategic investments are inextricably linked.

Emerging and disruptive technology has landed as the top risk to business growth over the next 3 years. In addition, CEOs have identified several other areas as top risks to growth: reputation, regulatory and operational issues, and climate change.

Reputational risk — such as a misalignment with customer or public sentiment — is raising more concern among CEOs compared to early 2022 (10 percent in August vs. 3 percent in February). In response to geopolitical challenges, 51 percent of organizations have discontinued working with Russia and 34 percent plan to do so over the next 6 months.

Cyber security has dropped from the top 5 risks to growth over the past year, with only 6 percent of CEOs naming it as their top risk (17 percent in February 2022). However, the cyber environment is evolving with 77 percent saying their organization views information security as a strategic function and as a potential source of competitive advantage. Geopolitical uncertainty is also raising concerns of corporate cyber attacks, according to 7 of 10 CEOs (73 percent).

Nearly three-quarters of organizations (72 percent) have a plan to handle ransomware attacks. However, more CEOs recognize that they are under-prepared for a cyber attack with nearly a quarter (24 percent) admitting so in 2022, compared to 13 percent in 2021.

When asked what their top challenge in communicating ESG performance to stakeholders was, nearly one-fifth (17 percent) of CEOs indicated it was stakeholder skepticism around greenwashing, up from 8 percent in 2021. More than one-third (38 percent) of CEOs say their organizations struggle to articulate a compelling ESG strategy. Nearly three-quarters of respondents (72 percent) also believe that stakeholder scrutiny of ESG issues — gender equality, climate impacts etc. — will continue to accelerate.

On talent, compared to early 2022, more C-suite executives believe that having the right talent and skills is also key to achieving net zero — or similar — ambitions. Nearly a quarter (22 percent) say a lack of skills and expertise is hindering the implementation of solutions — an increase from 16 percent earlier this year.

Global CEOs recognize the importance of ESG initiatives to their businesses, especially when it comes to improving financial performance and driving growth. In fact, 69 percent of senior executives noted greater demand from stakeholders for increased reporting and transparency on ESG — 58 percent in 2021.

Nearly half (45 percent) of CEOs agree that progress on ESG improves corporate financial performance, an increase from 37 percent just 1 year ago. However, as economic uncertainty continues, half are pausing or reconsidering their existing or planned ESG efforts in the next 6 months, and 34 percent have already done so.

“There is an elevated level of similarity between the findings identified at the global level with the trends which are currently observed in the Romanian economy. In the first half of the year the Romanian economy advanced by 5.8%, well above initial expectations. Moreover, recent local business sentiment indices show that businesses feel, on average, rather positive about very short-term future economic conditions. This, despite the continuing geopolitical uncertainty, primarily caused by the war in Ukraine, the rapid increase in energy prices and the rise in interest rates, as a consequence of higher inflation”, says Ramona Jurubiță, Country Managing Partner, KPMG in Romania.

Labour market perspectives follow those on economic activity prospects. The unemployment rate has been falling and has now reached its pre-pandemic levels, standing at 5.1% in August. This has exacerbated some issues pertaining to the labour market. Shortages of labour supply, talent and the skills mismatch have been felt more markedly across several sectors lately, including manufacturing and services. Local businesses often refer to these factors as being a challenge for their expansion plans. Employment tendencies in the near term are mostly neutral although some are positive, notably in retail and transport sectors where employment needs are marginally higher.

“Investments in technology are emerging as supporting a consolidated trend. Funds for investment that would aid the digitalisation of businesses, for instance, are available via the Recovery and Resilience Facility over the next years. At the national level spending on information and communication technologies has already increased substantially over the last years, a trend that has accelerated during the pandemic. If in 2019 the sector accounted for around 10% of Romania’s GDP growth, this has risen constantly since then, reaching 13.6% in 2021 and an impressive 29% in the second half of 2022. This points towards the increased attention businesses pay to investments in technology as a means of improving both their productivity and customer experience”, concludes Ramona Jurubiță.