Geo-politics and Women are the top Twitter trends leading into World Economic Forum 2017.

Mentions of ‘Trump’, ‘Brexit’ and ‘Elections’ were among the top keywords driving this geo-political conversation by those registered to attend the event thus far. 2017 WEF participants have published more than 108,000 tweets over the past 4 months.

This activity also suggests that the theme of the 2017 event, “Responsive and Responsible Leadership”, resonates well with WEF attendees, clearly voicing their sentiments as they relate to political leadership and the rise of populism throughout the globe.

Outside of the political realm, discussions on the topic of ‘women’ also surfaced to the top of participant Twitter activity, with content highlighting important issues around workplace inequality, as well as those related to the UN Sustainable Development Goals and the impact of things such as safe drinking water on the lives of the world’s most vulnerable women. 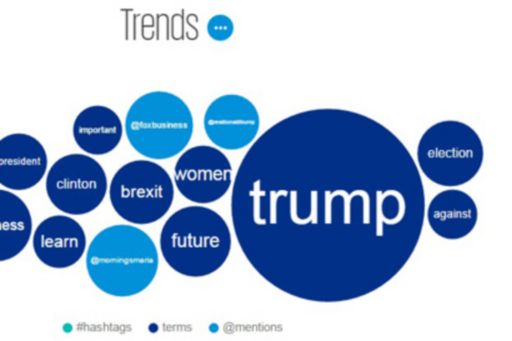 Of those WEF participants registered for Davos 2017, singer, songwriter and education advocate Shakira (@Shakira), who will be receiving an award at Davos for her leadership in improving the state of the world, tops the list of the most influential WEF participant on Twitter. Bill Gates (@BillGates), co-founder of Microsoft and devoted philanthropist, and Cory Doctorow (@doctorow), Canadian-British blogger, journalist and science fiction author, ranked second and third respectively.

In terms of the location of the Twitter engagements (retweets, replies and likes) of the participants’ tweets, the US, the UK, India and Mexico were the top four contributing countries, suggesting that these locations are most affected by current geo-political topics.

What topics will emerge as the most important at the 2017 meeting and throughout the year? Follow the social media conversation on WEFLIVE.com – your window into Davos.

Ways to engage with WEFLIVE

Developed by KPMG International in 2011, WEFLIVE is an innovative data visualization platform that aggregates Twitter data from WEF participants and what the world is saying in response. WEFLIVE – your window into the Annual Meeting – has had one mission since its launch: to help the global audience understand and engage with the WEF Twitter dialogue. In order to achieve this, the platform focuses on smart data analysis and rich, interactive visuals.

KPMG is a global network of professional services firms providing Audit, Tax and Advisory services. We operate in 152 countries and have 189,000 people working in member firms around the world. The independent member firms of the KPMG network are affiliated with KPMG International Cooperative ("KPMG International"), a Swiss entity. Each KPMG firm is a legally distinct and separate entity and describes itself as such.

The views and opinions expressed herein are the personal opinions of the interviewees and authors based on their personal experience working as Auditors in the industry and do not necessarily represent the views or opinions of KPMG International or any KPMG member firm.