R&D in the automotive sector

R&D in the automotive sector

In terms of R&D expenditure, the automotive industry ranks first in Europe, well ahead of such sectors like pharmaceuticals and biotechnology, the engineering goods industry, or aviation and defence. 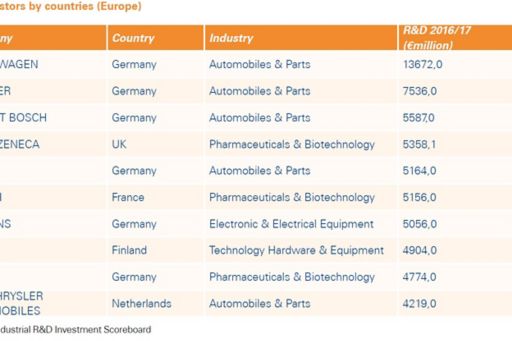 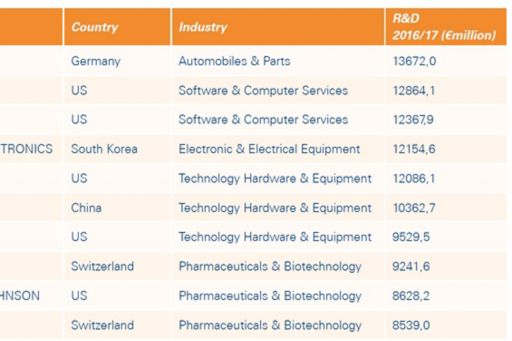 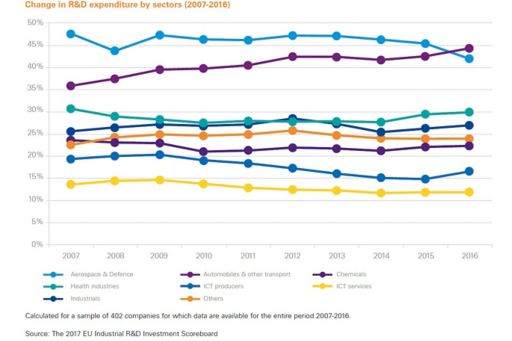 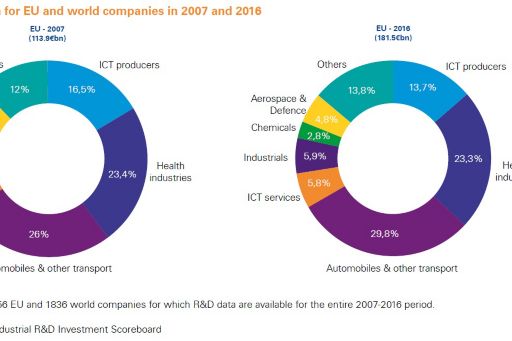 Findings of 2017 Scoreboard reveal that the automotive sector is the world’s third largest industry in terms of R&D and the largest one in the European Union and Japan. Currently, electric mobility is rising in prominence. British and French governments have announced that all cars marketed after 2040 must be fitted with an electric drive. Meanwhile, Volvo has communicated that all cars manufactured after 2019 will be powered with an electric or hybrid engine. The cost of components, including electric batteries, is constantly declining, what makes prices of electric cars more affordable - the price of Tesla 3 is expected to start from USD 35,000.
Current producers of ICE vehicles are also announcing their plans to launch production of electric vehicles - this group features Volkswagen (50 electric vehicles and 30 hybrids by 2025), Daimler (all-electric vehicles only by 2022), Renault (50% electric or hybrid vehicles by 2022), and Honda (two-thirds of all new cars sold in Europe to be offered with an optional hybrid drive by 2025). Meanwhile, new players are also coming to the game - Dyson plans to invest GBP 2.5 billion in production of an electric vehicle by 2010. In addition, Shell plans to install fast chargers across its gas stations, initially in the UK and the Netherlands.

Despite technological delays, the European Union should also produce batteries, including traction batteries for electric vehicles, reveal findings of a diagnosis presented by the European Battery Alliance in Brussels.

To-date, the competitive edge of the European automotive sector was mainly underpinned by ICE-oriented innovations, but it seems that this approach must be radically changed to maintain its competitive market advantage.
ICE powered vehicles consist of more than 20,000 parts, while EVs feature only approx. 7,000 components, what has enormous impact on changes in operations of the motor industry and hence sub-suppliers who are being forced to switch to production that contributes to electrification of vehicles. It is production of parts and accessories that remains the backbone of the Polish motor industry with an employment level estimated at approx. 147,000 people.

These figures reflect strong ties of the automotive sector with R&D efforts, what poses an enormous challenge for Polish companies from the sector, but also opens up prospects for development and marking their presence on world markets, especially that the sector is experiencing visible and constant growth. In longer perspective, this growth will not be possible without boosting the R&D potential of companies as well as development and implementation of innovative products, services or processes.

The fundamental issue that hampers improvement of the competitive edge of the Polish economy in the automotive industry is the limited number of competitive and innovative solutions created by Polish research centres and companies.

There are several reasons behind this issue:

Automotive organisations also project that profit growth in the near term may decline as R&D expenditure essential to develop new technologies for electric vehicles and autonomous cars must be increased.

The second edition of the InnoMoto competition comes as a response to these challenges. In May, companies from the automotive sector will be once more able to apply for grants. The Programme strives to improve the competitive edge of the Polish automotive sector on the world markets by strengthening its capability to generate innovative solutions.

Aid provided under InnoMoto programme will be allocated to implementation of research and development projects pursued by the automotive industry. Companies and consortia consisting of companies from outside Mazowieckie voivodship are eligible for grants whose maximum value may account for up to 80% of eligible project costs.

85 projects were submitted for substantive evaluation in the first call for proposals in 2016, whereas grants totalling PLN 253.34 million were allocated to 50 projects.

In line with its guidelines, the InnoMoto Programme will contribute to improvement of the competitive and innovative advantage of the Polish economy in terms of the sector’s innovative products and services. This will be achieved by development and preparations for implementation of a number of innovative products and services as well as modern organisational solutions that may be applied in the automotive industry.

As a result of numerous links between the automotive industry with other sectors, including financial and business services related to sales and maintenance of cars, road transport, fuel production and sales and road infrastructure, it is expected that the competitive and innovative edge of other industries will be also improved.

Radosław Ciechański – Manager in the Grants and Incentives Team