What are the director's duties and obligations?

What are the director's duties and obligations?

Recently there has been much commentary on the prospect of a large increase in company insolvencies arising from the COVID-19 pandemic, along with an increasingly turbulent macro economic environment.

While this is useful commentary, it is important that boards of directors understand their duties and obligations if their business is in financial difficulty or at risk of insolvency, and also what immediate actions need to be taken.

A high volume of corporate insolvencies has been avoided due to various government supports, tax warehousing and creditor forbearance.

The level of insolvencies since the onset of the COVID-19 pandemic in March 2020 has been widely described as artificially low.

At present there is a lot of uncertainty and potential financial difficulty facing businesses. These challenges will impact businesses in different ways but will result in increased costs, higher costs of debt, potentially reduced demand and output disruption. 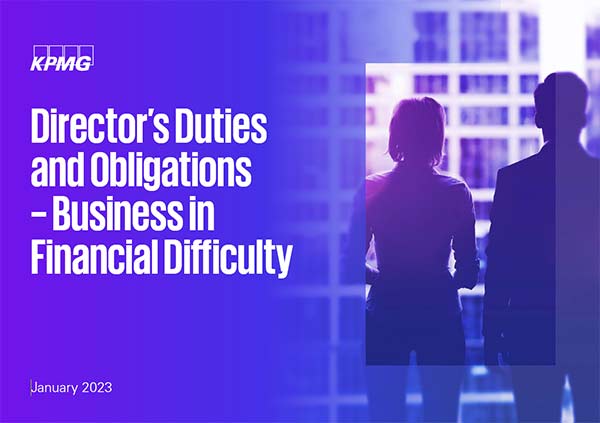 The Regulations introduce changes to the provisions of the Companies Act 2014 giving statutory recognition to the duty to have regard to creditors’ interests.

Traditionally the fiduciary duties of directors, as set out in the 2014 Act, are extended in situations where a company is insolvent, requiring directors to have regard to the interests of the company’s creditors.

Businesses will need to analyse whether they can survive and if not, explore the various restructuring options available to them.

Directors should be cognisant of the warning signs (discussed later) of financial distress.

Delaying decisions on seeking professional advice and / or taking steps to try to resolve a company’s financial difficulties, will likely worsen its financial position, resulting in a lower chance of ultimately avoiding closure.

It is important that directors recognise their responsibilities and duties with regards to shareholders and creditors during times of financial uncertainty, and the potential consequences if the right actions are not taken, for the directors personally as well as the business they manage.

These warning signs are explored in more detail below.

Businesses in financial difficulty will not face all of the above issues, but these are typically what is encountered with some issues arising earlier than others. A build up of these issues without planning or decisive action taken by a board may leave it too late for a business to explore feasible restructuring solutions.

If you are a director of a company that you believe is facing financial difficulty and wish to receive some advice on the matter, please do not hesitate to contact the Restructuring and Forensics Department at KPMG Ireland.