On 20 December 2021, the OECD / G20 Inclusive Framework on BEPS involving 137 countries issued detailed rules for the Pillar Two global minimum effective tax rate of 15%. This is a major milestone in the OECD / G20’s initiatives to address perceived tax challenges arising from the digitalisation of the economy. The release contains the details on how to calculate the minimum effective tax rate under the Global Anti-Base Erosion (GloBE) rules and targets 2023 for implementation. Tom Woods, Brian Daly and Cillein Barry of our Tax team explain.

The minimum effective tax rate and how it is calculated is one element of the Pillar Two GloBE plan. The actions to take if profits are not taxed in the home country at an effective rate of at least 15% is another element of Pillar Two.  Excluded from the OECD release were details on the Subject to Tax Rule (STTR). The STTR provides for withholding tax on payments included on a defined list (e.g., interest, royalties), from developing countries. Details on this rule are expected to be released in early 2022.

As expected, details pertaining to Pillar One, which provides for the reallocation of taxing rights to market jurisdictions for certain groups with turnover of greater than €20bn, were not published at this time. Again, these are expected to be released in 2022.

The EU intends to implement the Pillar Two measures by way of a Directive. The European Commission formally confirmed this on 22 December 2021. It is this Directive which, if it enters into force, will ultimately be transposed into Irish domestic legislation. The Commission has stated that the Directive should align closely with the BEPS Pillar Two plan with one important exception, extending the 15% minimum effective tax rate rules to groups that meet the €750 million revenue threshold but have purely domestic operations, i.e. do not have any foreign operations. This extension of the rules is required to ensure the Directive complies with the fundamental freedoms afforded to taxpayers under the Treaty on the Functioning of the European Union, notably the Freedom of Establishment.

Overview of the rules

The GloBE rules apply to Multinational Enterprise (MNE) groups that have annual consolidated revenue of at least €750 million in at least two of the last four years and have foreign operations (the latter criterion not applying for MNEs located in the EU under the EU Directive). The rules include details on implementation of the 15% minimum effective tax rate for in-scope companies. Where a jurisdiction has companies that do not pay a minimum effective tax rate of 15%, the jurisdiction in which the parent company is based will collect the additional top-up tax by way of the Income Inclusion Rule (IIR). Should the parent jurisdiction not implement an IIR, the tax is collected in other jurisdictions via the Undertaxed Payments Rule (UTPR), by way of denying tax deductions (or other equivalent mechanism) to collectively pay the top-up tax amount locally.

The Pillar Two rules do not apply to government entities, international organisations and non-profit organisations (preserving domestic tax exemptions for sovereign, non-profit and charitable entities), nor do they apply to entities that meet the definition of a pension, investment or real estate fund (preserving the widely shared tax policy of not wishing to add an additional layer of taxation between the investment and the investor). These entities are excluded even if the MNE group they control remains subject to the rules.

A de minimis exclusion for companies located in a jurisdiction when their aggregated revenue and income does not exceed certain thresholds is provided in the rules. Companies that have average annual revenue of less than €10 million and profit/losses of less than €1 million can elect annually to be deemed to have a nil top-up tax.

A number of important updates are included from the previous Blueprint, in particular the inclusion of a deferred tax approach to address temporary differences, the option to exclude certain fair value accounting movements, and specific rules relating to group reorganisations when calculating the GloBE effective tax rate (ETR). There are transitional rules which allow certain deferred tax assets and liabilities that exist prior to the GloBE rules coming into existence to be utilised in calculating the company’s GloBE effective tax rate.

The plan contains details on a possible exclusion from the UTPR for MNE groups that satisfy certain criteria in the initial phase of their international activity, defined as the first five years after coming within scope of the GloBE rules.

There is also the option to introduce a safe harbour mechanism to relieve the administrative burden on companies that meet the safe harbour conditions. Details of the eligibility criteria were not comprehensively included in the plan and will likely be included in the commentary to follow next year.

The rules also provide that groups within the scope of the rules will be required to prepare a GloBE Information Return each year.

The 15% rate is expected to apply to roughly 1,500 businesses in Ireland. For most taxpayers, circa 160,000 businesses, there should be no change if these proposals are introduced.

A top-up tax, either via the IIR or UTPR, should not apply to an entity where its profits in a jurisdiction are subject to GloBE ETR of at least 15%. It is likely that many jurisdictions, including Ireland, will introduce legislation that levies an additional amount of corporation tax on in-scope companies tax-resident in that jurisdiction to ensure a minimum effective tax rate of 15% under the GloBE rules applies. This should ensure the benefit of the minimum rate is reflected in the jurisdiction in which the profits are generated.

As announced by the Minister for Finance, Ireland’s R&D regime will be amended to ensure that it is considered a ‘qualifying refundable tax credit’ under the GloBE rules. In calculating the minimum tax rate, this will result in the R&D tax credit being recognised as part of a company’s GloBE income and not as a reduction in covered taxes, thus not disproportionately impacting the ETR calculation.

As final tax reform proposals move ever closer to finalisation at an OECD and EU level, and as detailed GloBE rules are now available, it will be important for all large businesses who are likely to be in scope of these measures to understand the potential impact on their business, including modelling the impact on their effective tax rate.

These changes could also drive a demand for additional resources within their business in order to comply with the complex measures, including the need for financial accounting input given the importance of the financial statements in calculating the ETR for GloBE.

KPMG Ireland will be hosting a webinar in the New Year which will outline key measures included in the OECD BEPS Pillar Two plan and the EU Directive, along with US tax developments, and how they will impact businesses with Irish operations. Details of how to register for the webinar will issue in early January. 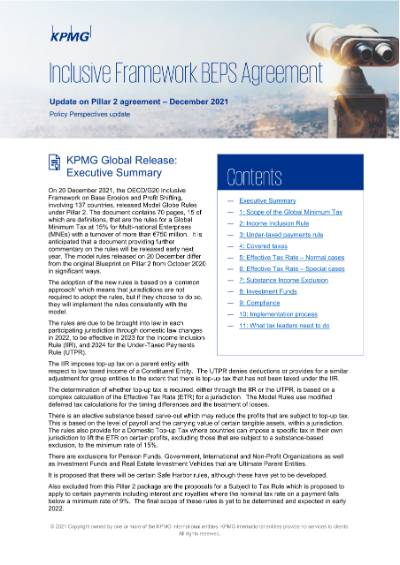 What does the OECD/G20 framework mean for Irish business?

Tax is one of the most important variables facing a business

Tax is one of the most important variables facing a business