How will Irish business be impacted?

How will Irish business be impacted?

On 8 October 2021, the OECD / G20 Inclusive Framework on BEPS issued a Statement which 136 members of the Inclusive Framework, including Ireland, agreed to. The Statement deals with a number of key aspects of global tax reform as set out in the OECD BEPS 2.0 proposals.  A detailed implementation plan together with some remaining issues are expected to be finalised by the end of 2021, with a view to implementing most measures in 2023.

Four members of the Inclusive Framework, Kenya, Nigeria, Pakistan, and Sri Lanka, chose not to sign up to the current proposals.

This Statement builds on the previous statement issued on 1 July and includes important clarifications, specifically on rates and implementation. While many important issues remain to be resolved, an ambitious timeline remains in place.  Model rules will be released next month, a multilateral convention is to be concluded by early 2022, and implementation of many aspects will be effective in 2023.

The day before the OECD announcement, the Irish Department of Finance issued a press release confirming Ireland will sign up to the BEPS 2.0 agreement supporting both Pillar One and Pillar Two. Previously, Ireland had reserved its position on the global minimum effective rate citing the ambiguity that would be caused by agreeing to a rate of “at least 15%”.  The Department of Finance sought to garner views from businesses with Irish operations on the BEPS proposals through a consultation earlier this year before committing to the Pillar Two proposal.

Upon removal of the words “at least” from Pillar Two, Minister Donohoe announced that Ireland would sign up to the proposals and would be increasing its corporation tax rate to achieve a 15% effective rate for multinational groups within the scope of Pillar Two. The impacted businesses would have suffered the additional taxes anyway even if Ireland did not agree to increase its tax rate. Ireland has also agreed to Pillar One proposals that reallocate taxing rights to market jurisdictions for in scope multinational groups. These changes, including the change in Irelands tax rate, are expected to take effect from 2023.

The 15% minimum effective corporation tax rate will only apply to multinational groups with turnover in excess of €750 million. Ireland will continue to apply the 12.5% corporation tax rate to companies with global turnover below this threshold. The 15% rate is expected to apply to roughly 1,500 businesses in Ireland. For most taxpayers, circa 160,000 businesses, there should be no change as a result of Ireland signing up to the OECD plan.

The threshold for Pillar One remains a group turnover of €20bn and profitability above 10%, with proposals to reduce the turnover threshold to €10bn after 7 years.  Pillar One is expected to initially apply to a number groups operating in Ireland with 25% of profits above a 10% margin reallocated from Ireland to market jurisdictions, thereby reducing Irish corporation tax receipts. Helpfully the commitment to remove unilateral measures such as Digital Services Tax and to not introduce similar measures in the future has been reinforced.

In relation to Pillar Two, in addition to confirming the agreed minimum rate of 15%, the level of substance carve-out for tangible assets and payroll has been confirmed. A helpful exclusion for groups during the initial phase of their international expansion is also included. Importantly for US headquartered groups, there remains a commitment to seek to ensure that the US GILTI regime can coexist with Pillar Two, although the prospects of approval of tax reform in the US remains a key unknown.

As final tax reform proposals move ever closer to finalisation at an OECD level and US tax reform progresses in parallel, it will be important for all large businesses who are likely to be in scope to understand the impact of these proposals on their business, and in particular, on their effective tax rate.  These changes could also drive a demand for additional resources within their business in order to comply with the complex measures.

It will also be important for businesses that are not in scope of the new proposals to monitor whether implementation of the proposals could impact them.

For further insights on the OECD / G20 Inclusive Framework and Department of Finance’s announcements, and what it could mean for businesses operating in Ireland, click here. 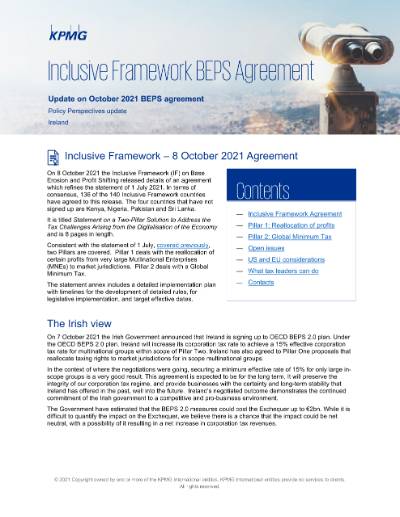