Stake your claim in the medical device value chain of the future and avoid the commodity trap.

While the outlook for medical device companies appears positive, unsustainable healthcare costs and new competitive forces threaten to alter the future industry landscape. If today's manufacturers fail to stake their claim in the evolving value chain, they risk being caught in the middle and becoming commoditized.

The days of simply manufacturing a device, and selling it to healthcare providers via distributors, have long vanished. Value is the new byword for success, prevention the preferred clinical outcome and intelligence the new competitive advantage. In this paper, we discuss the pathway to success in 2030 for medical device companies, following a three-pronged strategy:

The medical device industry is poised for steady growth, with global annual sales forecast to rise by over 5 percent a year and reach nearly US$800 billion by 2030 . These projections reflect increasing demand for innovative new devices (like wearables) and services (like health data), as lifestyle diseases become more prevalent, and economic development unlocks the huge potential in emerging markets – particularly China and India.

Despite these apparently attractive prospects, a shadow hangs over the sector in the form of a relentless downward pressure on pricing. Governments around the world are desperately trying to reduce the cost of healthcare – especially in the most expensive part of the system: hospitals. They want to pay less for medical devices and see proof of greater value in terms of better patient outcomes.

Responsibility for many purchasing decisions has already moved from clinical to economic buyers. Continued uncertainty exists in the market following the recent introduction of the European Medical Device Regulation.

These developments present a quandary for medical device companies that have historically concentrated on manufacturing and research and development (R&D), but are now seeing healthcare budget restrictions and new reimbursement regimes continue to snip away at margins. On top of this, new players – some from entirely different industries – are disrupting the sector by harnessing data to take ownership of customers, patients and consumers. In this volatile new marketplace, today’s device players are in serious risk of being stuck in the middle of the value chain, as mere commodity producers.

Traditionally, medical device companies have delivered value primarily through manufacturing and selling their products. But as pressures on the healthcare system mount, there are foundational shifts in the care delivery model, and as a result, the industry value chain is up for a drastic overhaul.

In the new normal, companies will need to step out of their conventional manufacturing role. Services and data intelligence will need to be integrated with products to offer holistic solutions, requiring a ‘power play’ across the value chain – strengthening existing business-to-business (B2B) plays and creating new ones, while introducing business-to-consumer (B2C) plays. These power plays will likely include a continuous slew of deal activities – mergers and acquisitions (M&A), strategic alliances and partnerships.

Medical device companies will ultimately seek to play a larger role in the value chain and get closer to customers, patients and consumers. Done right, this will not only add new revenue streams for them, but also contribute to shorter, cheaper, and fewer hospital visits – and thus lower healthcare costs.

The paper looks into the underlying industry dynamics and, using numerous examples and case studies, highlights the exciting possibilities open to device companies. 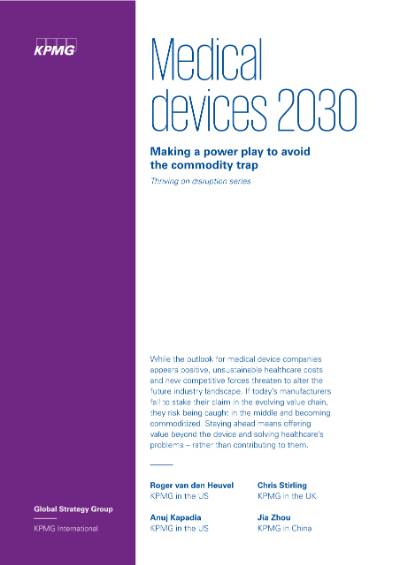 The pace of change is challenging leaders like never before. To find out more about how KPMG perspectives and fresh thinking can help you focus on what’s next for your business or organisation, please get in touch with David Walsh of our Strategy team. We’d be delighted to hear from you.

Are pharmaceutical and biotechnology players ready?

Are pharmaceutical and biotechnology players ready?

How technology will - and won't - disrupt your business strategy.

How technology will - and won't - disrupt your business strategy.

What are the implications of electric & autonomous vehicles for Ireland?

What are the implications of electric & autonomous vehicles for Ireland?