In his Budget speech, the minister confirmed that the Finance Bill will introduce a new interest limitation rule (ILR) as required by the EU’s anti-tax avoidance directive (ATAD). The ILR will cap deductions for net borrowing costs at 30% of a corporate taxpayer’s earnings before interest, tax, depreciation, and amortisation (EBITDA) as measured under tax principles. The legislation will be published in the Finance Bill; however, we discuss below how the legislation may emerge based on two consultations run by the Department of Finance this year.

ATAD provides that the ILR should apply both to interest and amounts economically equivalent to interest (such as discounts and the finance element of finance lease payments, amongst others). There is uncertainty around how some items might be treated for these purposes e.g. fair value movements on debt instruments. It should be noted that the ILR will apply to net borrowing costs; consequently, a company’s interest income will reduce its net borrowing costs.

The calculation of EBITDA starts with a taxpayer’s “relevant profits”, being the amount on which corporation tax finally falls to be borne but ignoring any losses carried forward or back.

In order to equalise the position in respect of income and gains which are taxable at different rates, the relevant profits are modified where they include amounts taxed otherwise than at the 12.5% rate of corporation tax. Such amounts are increased so that, if a 12.5% rate were applied to them, the same amount of tax would be due. For example, income taxed at the 25% rate of corporation tax is effectively doubled in the calculations (as are the expenses deducted against that income).

The company’s net borrowing costs, capital allowances and other tax-deductible amortisations are added back to its relevant profits to arrive at its EBITDA. As with relevant profits, where these amounts relate to activities taxed other than at the 12.5% rate, they are subject to a value adjustment.

ATAD allows ILR to be applied at a local group level. The Department’s consultation proposes that a local interest group would mirror existing Irish tax loss groups (although membership would be elective). While this will be useful for many groups, there will be instances where companies in an accounting group may not form part of an Irish tax loss group. It has been suggested that the definition of local interest group should be broadened to facilitate such companies.

Where a local interest group exists, then the ILR calculations comprise all of the results of the members. The consultation suggests that in doing so it would be necessary to disregard the results of transactions between the members of the interest group. This would likely create a significant administrative burden on taxpayers as it would necessitate identification of each and every intra-group transaction. We hope this element is removed in the Finance Bill.

ATAD permits a number of exemptions from ILR, including where a taxpayer’s net borrowing costs do not exceed €3 million. From the consultation, Ireland appears to be adopting this exemption. In an interest group, the €3 million limit applies to the group as a whole.

ATAD also allows Member States to exempt certain “financial undertakings” (such as banks, funds, insurance undertakings, and pension schemes). We understand that this exemption is still under consideration. In addition, ATAD contemplates an exemption in respect of legacy debt pre-dating 17 June 2016 and also provides for an exemption in respect of debt connected with long-term public infrastructure projects. Both exemptions are discussed in the consultation though we hope that certain enhancements will be included in the Finance Bill.

In particular, we see the long-term public infrastructure exemption as an opportunity to support key infrastructure projects announced as part of the Project Ireland 2040 plan and support the building out of the State’s renewable energy generation capacity. There is also an exemption from the rules for certain “standalone entities” i.e. entities that have no foreign branches, are not included in a financial statements consolidation, and have no “associated enterprises” (essentially persons with a 25%+ equity relationship or voting rights). This exemption is also included in the consultation.

The first relief, known as the equity ratio rule, compares the relevant taxpayer’s ratio of equity-to-assets to that of the worldwide accounting group (using their accounting results). Under this relief, where the taxpayer’s ratio of equity-to-assets is 98% or more of the worldwide group’s ratio, ILR is disapplied. Essentially, this test measures the extent to which the taxpayer’s assets are funded with equity, and, as a corollary, by debt. Where the proportionate level of equity funding of the taxpayer is as high as (or higher than) the group’s equity funding, no restriction is applied because the level of debt in the company is not greater than the group’s third-party debt. Leeway of 2% is permitted, hence the 98% threshold.

The second relief, known as the group ratio rule, calculates the group’s exceeding borrowing costs as a percentage of its EBITDA (using the group’s consolidated financial statements). Where the group’s percentage is higher than 30%, then the relevant taxpayer is permitted to use this higher percentage in its own calculations.

While the other strands of ATAD (most of which have already been implemented) affect many groups, the ILR will likely have a significantly wider impact given the widespread use of debt finance in all industries and sectors, both foreign and domestic. Indeed, other than the proposed change to the standard rate of corporation tax, this may well be one of the most significant changes to the Irish corporation tax regime of recent years.

Careful consideration must be given to its impact and matters such as whether to form a local interest group and the ability to access the various exemptions and reliefs. If you have not already done so, you should contact your KPMG contact to discuss ILR further. 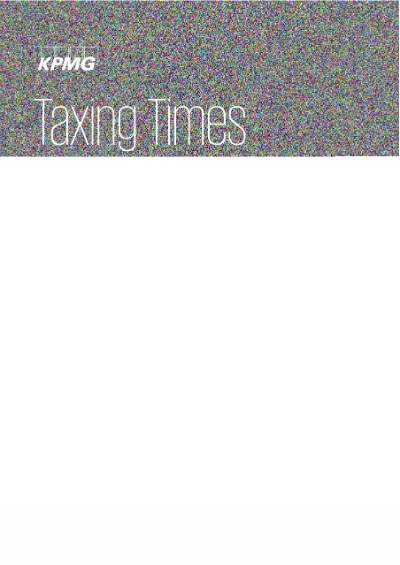