With the ever-increasing forms of unregulated credit that lenders can offer to consumers, the Department of Finance has sought to bring the providers of Personal Contract Plans (“PCP”), hire purchases, consumer-hire agreements and indirect credit agreements within the regulatory remit of the Central Bank of Ireland’s (“CBI”) Consumer Protection Code (“CPC”).

As at August 2019, the amount of outstanding consumer debt stood at €13.7bn, of which car finance accounted for 44% in the form of Hire Purchase and PCPs agreements. Also included in this €13.7bn, is the “buy now, pay later” option offered by most retailers, which is becoming an increasingly popular form of credit with consumers between the years 18 - 36.

The proposed changes will come into force in the coming months when the Consumer Protection (Regulation of Retail Credit and Credit Servicing Firms) Bill 2021(“the Bill”), published in July 2021, is passed into law. The Bill will update the Central Bank Act 1997 (“Act of 1997”) to extend the CBI’s authorisation requirements to persons or intermediaries carrying out hire purchase or consumerhire business.

Under the legislation, the CBI will have the power to exempt entities from the scope of the Act of 1997 where it deems the body to provide a public service, such as Local Authorities who provide affordable mortgages. This is because the requirements will be too onerous on the Local Authority, limiting its impact on the market. It will also update the Consumer Credit Act 1995 (“Act of 1995”) to provide a maximum allowable Annual Percentage Rate (“APR”) that consumers may be charged. The inclusion of hire purchase financing under the Act of 1995 will now require the APR to be included on the hire purchase agreements.

The changes in the Bill are driven by the 2018 Tutty Report which reviewed the regulatory framework of the PCP market and the adequacy of consumer protection in this area. The report made several recommendations to address gaps it found in the regulation of the market. A high-level summary of the key requirements outlined by the Bill are summarised below:

Next Step - Adoption. It is anticipated that the Department for Finance will commence consultation with the European Central Bank (“ECB”) and progress the Bill through the Oireachtas in the Autumn of 2021.

How can KPMG help?

KPMG’s Consulting experts in the conduct, regulatory and financial services sectors have unparalleled experience assisting financial institutions with regulatory implementations. We have extensive experience in guiding organisations through regulatory change and designing and implementing your operating policies, procedures and systems to align to the requirements. We have designed methodologies that will help you during the process. Examples of how our team of experts can assist include:

It is important to maintain oversight of your lending products post regulatory implementation to ensure continued adherence to these requirements. We have an established product assurance framework, which will arm you with the tools and techniques to control your product set on an on-going basis, maintain regulatory compliance and enable positive customer engagement. For more information on the product assurance framework, please click here. 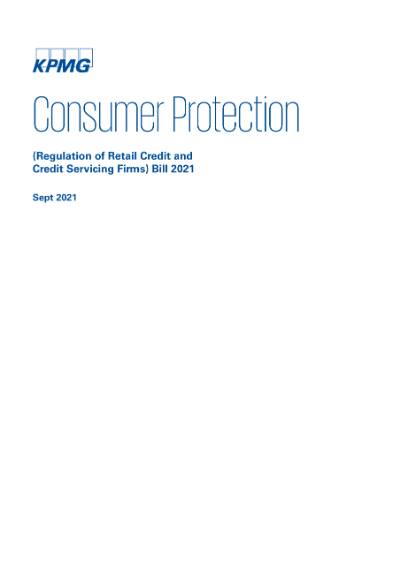 More in our Consumer Reform series